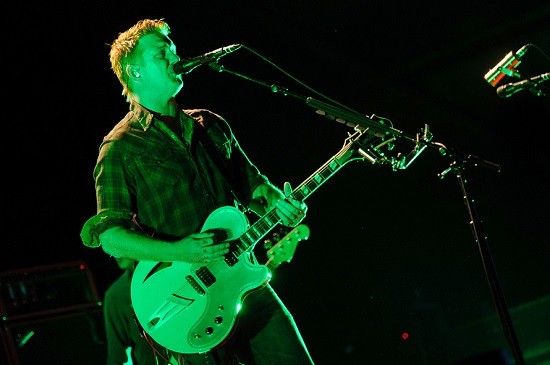 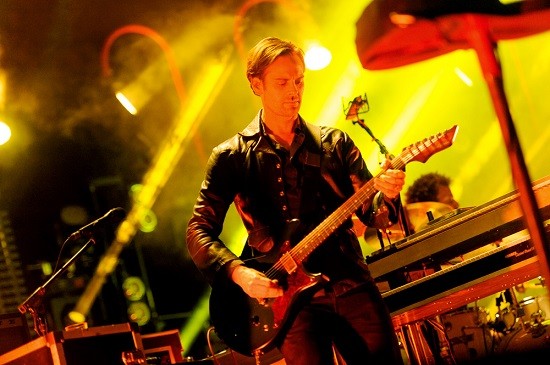 A big part of that equation is the rhythmic foundation established by drummer Jon Theodore and bassist Michael Shuman. (Theodore was particularly impressive in his note-for-note replication of the complex fills and jerky patterns written by former Queens drummers Dave Grohl and Joey Castillo.)

As excellent as the show was, it wasn't faultless. Things hit a slight lull during successive numbers "If I Had a Tail" and "I Sat By the Ocean." Though both are fine songs, they aren't in the same league as the rest of the set, and their slower tempos slowed the group's momentum. Also not helping were Shuman's bass effects, which made him too loud in a few spots on "Ocean" and "Smooth Sailing."

These minor complaints were quickly forgotten during the show's closing segment. Queens surged through the incessant riffing of "Go With the Flow" before revving up fan-favorite "Song For the Dead." Here, the group bashed through its trademark "robot rock" style in the song's intro before yielding to its stop-start verses. Homme and Van Leeuwen then got to have fun throwing different fills in each gap before eventually unleashing a monstrous dual solo. This gave way to a short but effective drum solo that transitioned into the furious tom-tom pounding that drives the song's outro.

This climax would have been tough to follow, which is perhaps why Queens didn't bother trying. Even for a shortened festival set, the band had room for a couple more songs. Instead they left the stage, now littered with feedback-producing guitars. That extra run-time would have been more than welcome, but it's hard to imagine any way a performance this satisfying would not leave fans wanting more.

You Think I Ain't Worth a Dollar, But I Feel Like a Millionaire No One Knows My God Is the Sun Burn the Witch Smooth Sailing Little Sister If I Had a Tail I Sat By the Ocean Go With the Flow Song For the Dead