In fairness to the above title, two of those instances of fondling were perpetrated by his own hand. The other 24 gropes were extensions of the intense fandom R. Kelly inspires, an adoration that bordered on worship from the rafter-stacked patrons of the Fox Theatre. He earned every display of affection with a 90 minute set proving that R. Kelly is as talented, entertaining, and completely batshit crazy as his reputation suggests. Or, as Kelly put it, "Tonight there's gonna be some shit that's just me doing me."

Curtain drops, R. Kelly appears in silhouette form behind a thin white sheet. He performs "Huff And Puff." Sheet falls, and Kelly is donning a white leather jacket with "SINGLE" bedazzled in gold jewels down his left sleeve and "V.I.ME" written on the back in the same fashion. We discover these jewels are actually miniature LED lights a few songs later -- or, rather, sections of songs since the majority of his set played like a montage of his hits in 10 to 60 second clips.

R. Kelly takes every opportunity to shout out the single ladies and to demand the crowd make some noise. In his trademark "Trapped In The Closet" delivery, he sing-speaks into his sparkling white wireless microphone, "I'm gonna stop this show unless I know it's all real R. Kelly fans up in this motherfucker."

R. Kelly meanders around the stage asking in this same "Trapped" style, "Can I get a towel to wipe my face -- 'cause that's what we motherfuckin' do." Then, "Can somebody out there wipe my face?" as he kneels to the standing fans crowded around the stage. Two women grab the towel and start to fight over it before Kelly sings, slightly higher pitched and more aggressive, "Will some other bitch just wipe my goddamn face?"

R. Kelly asks for a single lady out there to tell him what she'd want to do to him. A woman leans on stage and whispers something, to which he replies, "Are you serious, girl? I've never even heard of shit like that. You gonna fuck around and get me pregnant."

R. Kelly fakes out the audience after thirty minutes, saying "That's my time, thanks." The audience, of course, calls him out on it and he responds by picking up a sheet of paper and literally reading the setlist thus far in the show. "Oh, my bad, I got like 52 more songs to do tonight." He grabs another sheet of paper and puts it in his pocket. Somebody asks what it is and he replies, "Oh, that's just some scrap shit."

R. Kelly says, "It's hot up here. I need a stool or a chair or some shit." His crew brings him a throne and he performs "R&B Thug" acapella and seated.

R. Kelly brings a single lady on stage, and two men dressed in white lab coats bring her a clipboard and a pen. She signs the waiver and is brought into a white cage that the crew snuck on stage while Kelly briefly roamed the audience. The men tie her arms and legs in chains attached to the cage, Kelly enters and a white sheet drapes over the cage. The band keeps playing and the cage starts rocking. The cage becomes backlit and we see the outline of Kelly freaking on the volunteer. More rocking, more freaking, and when the sheet is removed, Kelly and the lady both act ashamed.

R. Kelly says the word booga a few dozen times in a row and then sings an operatic hymn in perfect Italian with no introduction before or explanation after.

R. Kelly announces a segment called "R. Kelly Karaoke." The crew brings six microphones on stands out and faces them toward the seats. Kelly sits down at the miniature "Singles Bar" set up on the side of the stage, lights a cigar, and sips a cocktail. Meanwhile, "R. Kelly Karaoke" is essentially Kelly hanging out listening to clips of the actual recordings of his songs while the audience haphazardly sings along. One song in the set is "Bump N Grind," a song he has already performed twice this evening.

R. Kelly, only a few minutes after the most intense session of having his junk rubbed like it was a good luck charm, sings "I Wish" as a tribute to his mom. The song breaks down and Kelly dramatically sings "I wish...I could play music until Jesus comes back" and "I wish...my kids would listen to me when I tell them to get off the damn phone" and "I wish...I could get a hug, like a big momma hug right now" and "I wish...Obama could be president forever. We did it again, y'all!"

R. Kelly has one completely serious moment with "I Believe I Can Fly." The song is as schmaltzy as it gets, but I am shocked at its ability to move so many members of the audience. The power was infectious, even if all I could think of was Space Jam. But along with the quickfire opening segment and the random Italian traditional hymn, "Fly" was impressive on a human level. I find it easy to be distracted by his scandals, his idiosyncrasies, and his frequent decision to rhyme a word with that same word, but behind all that baggage, R. Kelly has a voice that could make an angel jealous. Or, could make a normally sane woman want to rub his crotch in front of three thousand people. 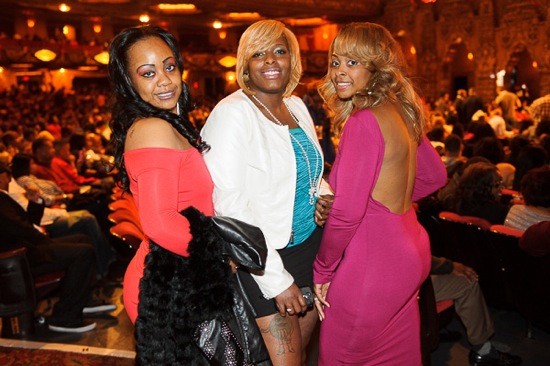 Personal Bias: I firmly believe that R. Kelly is advanced, that "Freaky In Da Club" should have been a massive hit, and that the Hood Internet's mashup of "I'm A Flirt" with Broken Social Scene's "Shorelines" trumps the original.

Overheard: The woman sitting next to me said, "Not for my hundred dollars you ain't done" after Kelly's mid-set fakeout and, "I didn't come here for no opera or some shit" after his hymn. I also spied her texting "Too many old ass people here."

Setlist: -Huff & Puff -Body Calling -TP2 -Bump N Grind -Freaky In The Club -Hotel -That's That -Fucking You Tonight -Strip For You -So Sexy -Gigolo -Snake -Fiesta Remix -I'm A Flirt -Ignition Remix -Go Getta -Wonderful -Number One -Good Sex -Slow Wind -R&B Thug -Half On A Baby -Sex In The Kitchen -Down Low -Real Talk -12 Play -Slow Dance (Hey Mr. DJ) -Bump N Grind -Feelin' On Yo Booty -Booga/Hymn -Love's In Your Face -Green Light -Kel's Karaoke -Bump N Grind -Honey Love -Dedicated -I Can't Sleep Baby -Just Like That -She's Got That Vibe -Forever -I Don't Mean It -Get Up On A Room -Contagious -It Seems Like You're Ready -When A Woman's Fed Up -When A Man Lies -I Wish -Heaven, I Need A Hug -I Believe I Can Fly Encore -When A Woman Loves -Step In The Name Of Love