Send a News Tip
Ah, the ABC Afterschool Specials, those beacons of moral rectitude. In the '70s, '80s and even into the '90s, these TV movies showed kids just like you and me -- getting into total drama or dealing with big issues. Popular topics include divorce, having babies too young, adoption, physical trauma, drugs, illness and, um, dance offs. (See after the jump.) Scenarios might involve future bad boy Rob Lowe and bad girl-turned-tragic-figure/Different Strokes kid Dana Plato having a kid together and fighting over custody, like in the classic "Schoolboy Father."
And then there's this one from 1987: "The Day My Kid Went Punk." This doesn't quite rival the punk rock episode of ChiPs (or does it?) but we'd like to imagine it does. I mean, ignoring the fact that it should really be named: "The day my kid lost his hairbrush" or "The day my kid tried to dress up like Ian McCulloch or Robert Smith." Thanks to Pitch freelance genius Chris Packham for bringing this gem into my life. 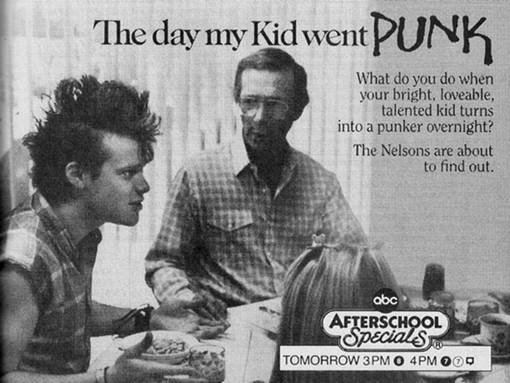 See, even CBS got into the act, with its schoolbreak special "Ace Hits the Big Time," its own take on the big-message after-school fluff.