The world-renowned artist will return to St. Louis for his fifth annual concert, Kribmas, on December 18 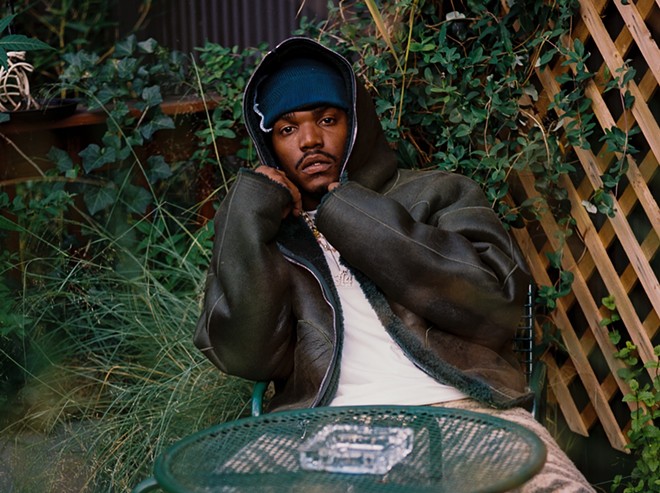 Before Smino got a tooth pulled last week, his mom called him.

“Who’s going to pick you up from the dentist?” she asked.

Smino doesn’t even live in his hometown of St. Louis anymore. He lives in Los Angeles, far from his family. He’s a world-renowned rapper with half a billion streams, a record deal with Motown and three studio albums.

“Nobody’s picking me up,” he told his mom.

But her words got him thinking.

“I just thought about it like that — like, damn,” he says. “It be moments like that, that make you think like, ‘Damn, if I was at home, my mama would be picking me up.’”

Smino, 31, isn’t going to lie: He misses St. Louis. That’s why he will return home on December 18 for his fifth annual holiday concert, Kribmas, at Stifel Theatre. He will spend a few days in the city before beginning rehearsals for his upcoming worldwide tour, Luv Is 4Ever, with Atlanta rapper JID, which will start in January.

St. Louis, he says, is still “very prominent in me.” It’s where Smino learned how to play music in church, where he was voted “best rapper” at Hazelwood Central High School. It’s where his family still lives — his mom, his nephews, his best friends. Over the years, he has moved away, living in Chicago and Los Angeles, pursuing a career in music.

His 2017 album blkswn was lauded as one of the “40 Best Rap Albums of the Year” by Rolling Stone. He recently released the single “90 Proof” with J Cole, which has received over 1 million views on YouTube. The other day, he was recognized by a fan in a hotel, as Smino merely waited for food. “Literally, seeing you today made the whole shit better,” the person said.


It’s safe to say that Smino has become one of St. Louis’ most famous musicians. And even as he does blow up, he continues to represent his hometown, insisting that people call him a St. Louis artist — even when he lived elsewhere.

His most recent album, October’s Luv 4 Rent, has St. Louis written all over it. He even named songs after his grandparents. He says the album was conceived from being away, thinking about his home.

“I miss my family,” he says. “It had a lot to do with just missing everybody, missing St. Louis and missing my family.”

Smino can talk all he wants about his love for St. Louis, but he knows that it’s different to be there on stage, performing in front of his mom, his family and thousands of other people from his hometown. He “slips in and out” of St. Louis, he says, spending time with his loved ones. But he makes his public return for Christmas –– and more specifically, Kribmas.

“I want to inspire them motherfuckers in person,” he says.

Smino first celebrated Kribmas in 2016 when he was still an up-and-coming rapper out of St. Louis. He hadn’t even released his first studio album yet. In its first year, he remembers, he sold between 350 and 400 tickets.

Now the show is partnered with Spotify and Smino expects nearly 4,000 people to sell out Stifel. The yearly event has expanded to a full-scale multi-day celebration. In the days leading up to the show, he will host a sneaker art workshop for kids. The proceeds from the concert will support Almost Home, a non-profit helping homeless women and their children, and provide new coats to the Annie Malone Children and Family Services. Ticket sales will also go toward building Smino's forthcoming St. Louis art school, the Kribmas School of Arts.

Smino wants the night to be made for St. Louis. In 2019, his last local performance before the pandemic, he rocked a Cardinals varsity jacket, Air Force 1’s painted by St. Louis artist Brock Seals and brought out Nelly. This year, he promises, “I’m bringing out someone crazy.”

“I make Kribmas like extra super duper special,” he says. “I always try to go the extra mile for Kribmas.”

For Smino, Kribmas is for the people at “the Crib,” the people of St. Louis, letting them know he’s still here — he’s from the Lou, he’s proud, and you should be too.

“It's important just to inspire,” he says. “You just never know, bro. The smallest little bit of spark might fuck around and send someone on the right track.”