OK, without the house and we doubt anyone stops being polite. But the Chevy Music Showcase will feature twelve St. Louis artists in a TV series. Each of the bands will get a two-minute episode on KMOV Channel 4 (CBS) with performance and interviews, with full clips to be found online for free download at the Chevy Music Showcase web site. The site is under construction at the moment -- you can find more information and updates on the Facebook page.

This Thursday, the series will get an official launch at Atomic Cowboy (4140 Manchester Avenue, 314-775-0775). Admission is $5 or free if you Like the Facebook page -- Beth Bombara and the Feed, both featured on the show, will perform.

The Showcase is funded by Chevy (how'd you guess?), specifically an association of 32 dealerships in the area. 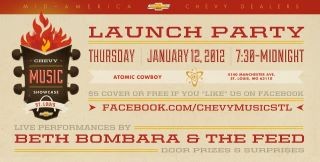