R.E.M Says Goodbye: The Great Beyond 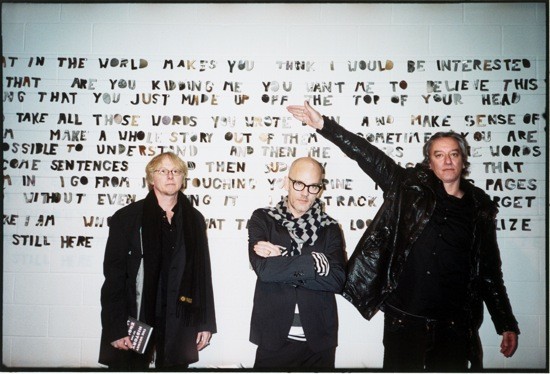 One of the most important bands in rock music has broken up. After 31 years together, R.E.M. has announced its retirement on its website with a humble, thankful note. The declaration shocked fans, who immediately bombarded social networks and entertainment news stories with a flurry of bittersweet comments and links to favorite music videos.

There is a reason for all of this upset: R.E.M is special. Not just to fans, but to history. It is impossible to overstate the significance of this band. R.E.M. has influenced the very fabric of American culture, including music, morality and politics. From its meager beginnings in small town Georgia to playing the biggest stages in the world, R.E.M. pulled off something nearly unthinkable: it maintained its integrity and kept making great music.

Since 1980, the band has been a constant. That's not to say that it never evolved. Both the band members and the music grew with grace, never repeating a proven formula, always claiming new ground. From the mid-tempo jangle on Murmur to the rock blast of Monster and on through the sun-soaked twinkling in Reveal, the band exhibited a remarkable ability to morph its sound while still retaining its essence.

Individually, the band members each play a fundamental role in creating the R.E.M. magic. A shy poet and photographer, singer Michael Stipe seemed frequently uncomfortable in his roll on stage. At the band's early shows, he spent much of his time on stage hiding behind a big curtain of curly hair, but he now ends his tenure as a dancing, eyeliner-wearing, confident front man. Mr. Mike Mills is on the bass and keyboards and adds the absolutely essential R.E.M. backing vocals. His distinctive voice is one of the main pillars of the R.E.M. sound. And then, of course, there is the great Peter Buck. Buck is one of the most important rock guitarists in history and he's also the man who plays that instantly recognizable mandolin.

Hard times befell the band in 1997 with the departure of original drummer Bill Berry. He had suffered a brain aneurysm on stage a couple of years before, and he was ready to move on. This was a crucial, emotional time for the band. Still, its members remained like brothers. Berry said that he would not quit unless the other three would continue on without him. After seventeen years with Berry behind them, the other members of R.E.M. soldiered on. Stipe compared this time to a three-legged dog that is learning to run again.

But through every change, audiences followed. People react to this band. Millions of people. Worldwide. It's hard to wrap your head around the idea that multitudes of people can have the same intense connection to a song that seems so personal to you individually. And, unfortunately, it is impossible to hear hits like "Losing My Religion," "The One I Love" and "Everybody Hurts" with fresh ears. These songs are so much a part of our lives that they've been unfairly relegated to the land of boring, played-put FM schmaltz, instead of standing as strong, statement-making singles as they were intended.

But even with these internationally known hits, fans have vastly different opinions of the song's meanings. Main lyricist Stipe has always steadfastly refused to explain the meaning of any of his lyrics, but you don't even have to understand English to feel the gut-wrenching weight of "Country Feedback" or the sexy swagger of "Lotus." In this respect, R.E.M. songs have a unique quality: they can be both specific or universal, depending on the interpretation. And while every listener has a slightly different take on the band, there is an authenticity there, a sincerity, that hordes of people respond to favorably.

R.E.M. members and management put this unparalleled popularity to good use. They recognized their position and decided to use their powers for good. Those thousands and thousands of people who attended any one night of an R.E.M. concert were encouraged to participate not just as a cheering audience member, but as a mindful member of society. Always politically aware, the band used these events as opportunities to enlighten audiences and ignite personal passions. Whether it was encouraging fans to donate to disaster relief, to rally for gay rights, to sign petitions in support a free Tibet or just to register to vote, there always seemed to be volunteers present to facilitate positive action.

This philanthropic trait also applied to other areas. The business side of R.E.M. keeps its headquarters in the bands hometown of Athens, Ga. Thanks in no small part to the guiding hand of the bands long-time manager, Bertis Downs, the band has always found ways to reach out and keep the city intact. R.E.M. as a unit is one of Athens biggest preservationists -- and the band members are among the first people to buy a historical property for renovation or to speak to the press in an attempt shine a light on endangered local buildings and landmarks.

This awareness of their position was also extended to help other bands. R.E.M. members served as mentors and wise elders to a whole generation of younger bands, including big names like Radiohead, Nirvana and Pearl Jam. And up until the very end, the band invited scores of newer bands to be its supporting acts, handing over a staggering amount of prime exposure for any group that it believed in.

For all of these reasons, the members of R.E.M. are our heroes. As fans, we believed in them. We trusted them. We grew up with them. The music was there during our first kiss and it floated around when we were falling in love. It soothed our broken hearts and it played at our wedding receptions. We've seen this band through its ups and downs, and it has done the same with us. These guys are the soundtrack of our lives. Maybe that's why it's so hard to imagine life without them.