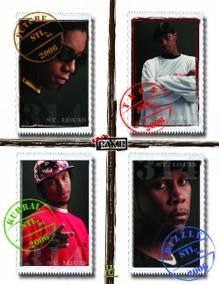 There are plenty of musicians who died before getting definitive time in the musical spotlight. Tega -- a rapper who was affiliated with Nelly's St. Lunatics -- is sadly in that category, as he passed on while he was in the midst of climbing the musical ladder.

Tega -- whose real name was Oretga Devon Henderson -- was part of Da Camp, a rap group that often performed with Nelly and Murphy Lee. By 2009 the group had put out some mixtapes and was in the process of completing a full-length album.

But by the end of May of that year, Tega had died after succumbing to injuries sustained in a shooting.

Initial reports stated that Tega was fatally wounded in a Wellston shooting that occurred on this day in 2009. But later reports revealed that Tega's death had a more disturbing undertone. the Associated Press reported that Tega was actually shot on May 22, a day when police say he joined two other friends to rob an apartment.

The wire service noted that the three men broke into a house at 1:53 a.m., and were met with gunfire from people inside.

This was, unfortunately, not unfamiliar territory, as Tega had a criminal record that included two drug charges, felony tampering with a motor vehicle and felony unlawful use of a weapon.

That gave many of Tega's friends pause. While not condoning his crimes, many people who worked with Tega said that he had immense promise in his bid to make it in the music world. For instance, Futurre Ali -- a member of Da Camp -- told the Post-Dispatch "everyone has their positives and everyone has their negatives. I'm not going to say he was an angel. But I think the good outweighed the bad."

And St. Lunatics member Kyjuan Cleveland told the P-D that Tega "got mixed up in the streets, but he was so talented, we thought we could pull him out of it. He was on the right path for a minute, but times are hard, and he started getting around the wrong people."

For what it's worth, Tega's contributions to St. Louis' music scene can be heard on Da Camp's MySpace page. That includes "UCME," which features a guest appearance by Murphy Lee. And Tega also lives on through YouTube, as evidenced by this video where makes a guest appearance with Arch Ryvals: