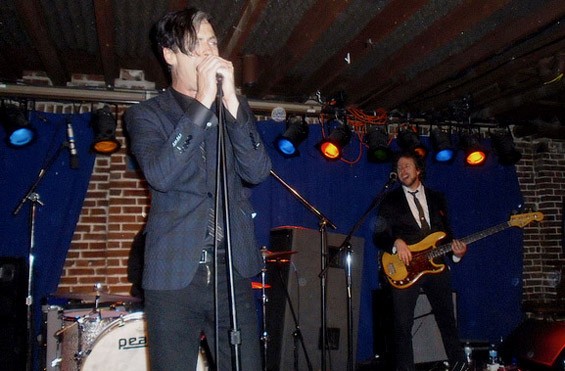 Roy Kasten
Fitz and the Tantrums at the Duck Room

Saturday afternoon and evening in the Delmar Loop, the icepocalypse was finally subsiding after weeks of sadistic winter. Gutters and parking lanes yet proved treacherous, but the scene at the sold-out basement bar, Blueberry Hill's Duck Room, did what it could. Bottle and package the heat of the first proper Fitz & the Tantrums show in St. Louis and leave the eco-atrocities of Ice Melt behind.

"Proper" because the LA-based, neo-revivalist, blue-eyed soul sextet had already that afternoon smoked an in-store gig at Vintage Vinyl and laid down a quick session at KDHX (listen here). And last April, the band had appeared on the UMSL campus for an event, details of which not even the Michael Fitzpatrick (Fitz) could remember when originally queried.

No surprise, then, that the cut-rate ticket price of this show would lead to an early sell-out and the drooling of motherfuckers scalpers. Even after a blizzard of publicity, high-profile TV slots, commercial spots, blog frenzy and a web-casted concert at Daryl Hall's house (geezers know broadband), the band is still in the building stage, meeting and greeting after the show (mugging-with-Fitz now dominates Facebook profiles in a 30-mile radius of University City) and laying everything down, as a growing band must, persuading an audience for some 90 minutes that sweat and soul trounces hype.

The opening act, in other words, had its work ahead of it. Jon Hardy & the Public got the nod just four days before the show; the St. Louis rock & soul band sounded like they'd been waiting by the phone for months. Opening with Marvin Gaye's "Baby Don't You Do It," a cover that most would elect for a closer, Hardy and his smartly dressed ensemble quickly owned the already full room. Whether or not Hardy and Glenn LaBarre knew that the headliner would be guitar-free (not counting bass), the two backed into taut, scraping guitar lines, pushing the song even (yes, I'll say it) past the Band's version.

With baritone and tenor sax, subtle keyboard tones and a charging, sure-as-Secretariat rhythm section, the set focused on the band's best album, Working In Love, though a cover of Randy Newman's "You Can Leave Your Hat On" and the newer songs, especially "A Hard Year" (from the EP of the same name), managed that small amazement of live performance: a perpetual feeling of building and building and building again, like the energy reserves in a single good tune would never peak. And now that Egypt is free and a new era of justice reigns over the world, would it be OK if Hardy's song "I Will" becomes the hit it deserves to be?