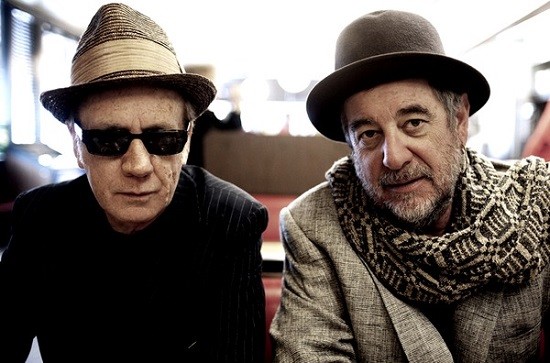 The night before Greg Brown and Bo Ramsey returned to St. Louis and the Sheldon Concert Hall, there was a show at a club across town that featured a rock band called the Hold Steady. You've probably heard of them, and you've probably heard about that sold-out show. The words "joy" and "powerful" and "community" and "party" were tweeted as often as fists were pumped, and speaking just for myself, my feet never touched the ground until Craig Finn and his ten-year-running band left Lemp Avenue for another show in Louisville.

But there's more than one way to skin musical transcendence.

Simply put: Live music is an outward act, a gap bridged, a connection you need but can never really understand. But you can feel it. And you don't need one of our very best rock & roll bands and one of our most charismatic performers to take you there, to take you with them.

Sometimes, as with two old (and they know and care fuck all about it) maestros, being drawn ever inward by whispers and moans and the pulse of two guitars and the chants of the blues, you can also get all the way there.

"I walked around downtown today," groused Brown from his chair on the Sheldon stage. "Didn't see a soul, just a few people off in the distance. Maybe they heard I was in town." The songwriter doesn't get back to St. Louis very often, though it's an easy drive from his and his longer-than-longtime partner Ramsey's home turf of Iowa City. To say that Brown can be a moody performer is to understate the obvious. At some shows you would barely know he was there at all and barely comprehend a line, unless you were close enough to read his lips. He delivers every phrase in a curdled and slurred growl that would make God's own dive bar barfly blush. Like Ramsey, he'd rather let the sound -- creaky and cranky and soiled -- do the talking.

Robert Franklin Ramsey stepped out to the stage before a not-quite-filled Sheldon audience; he wore his trademark 45-gallon straw cowboy hat like a chieftain's headdress and he caressed his old, open-tuned Gibson like it was a child. Maybe you've seen Ramsey with Brown before, or maybe with Lucinda Williams' post-Car Wheels touring band, or perhaps with Brown's daughter Pieta (who he produces and to whom he is married), but it's easy to forget just how singular his approach to the blues is.

Ramsey is more than passing familiar with the trance blues of JJ Cale and Junior Kimbrough, but he immerses himself and his audience in a deep and eerie well of loneliness that's, paradoxically, never self-absorbed. He called his fourth studio album Stranger Blues, and that his blues surely are. His touch on the guitar is lighter than light (better to turn up the Fender Deluxe to), but not really delicate, as his long hands move over the strings like he's stitching in leather some pattern only he understands, though he invites you to try to comprehend as well. In a fleeting seven-song set he played two of his masterpieces -- the hymn to Midwestern loneliness "555 x 2" and the part-comic, part-desolate hymn to his influences "Down to Bastrop" -- and saved his solos (if you could even dare to use the word so loosely) for his role as Brown's accompanist. He simply set the tone for the evening. This was music as modal and minimal as a lunar landscape or a winter onion field whose beauty he's not going to let you forget.

Brown's set was just as fleeting -- eleven songs plus an encore of "Billy From the Hills," a fierce and funny tribute to his Ozark kin -- and just as hard to pin down in rock & roll terms, though the essence of rock & roll still made itself felt. Opening with "Cold + Dark + Wet," a "seasonal number" in Brown's words, the songwriter, even as he sunk into his chair, hulked over the stage in a knit cap, white T-shirt, long suit coat and clog-like leather ankle boots that flopped around his feet as he kept his own kind of twitchy time. He made every song count, from "Laughing River" (the definitive evocation of a minor league baseball dreamer) to the twisted and bawdy "Stiff Old Bones" (the closest he would come to a sing-along all night; a game few tried to grunt along from the side seats) to the self-reflexive masterpiece, "The Poet Game," a song about what it means to seduce with song, with words, with voice and melody, the small ecstasies of those moments and the prices you pay along the way. As Brown sang of the "strangers that know no shame," Ramsey stood up, for just once that evening, to find just the right angle and intonation on his burnished Stratocaster, and to lace the song with notes that maybe someone somewhere (even him) might have played before, but you wouldn't know it from all the slipping-away tones and all the beautifully deformed reverberations.