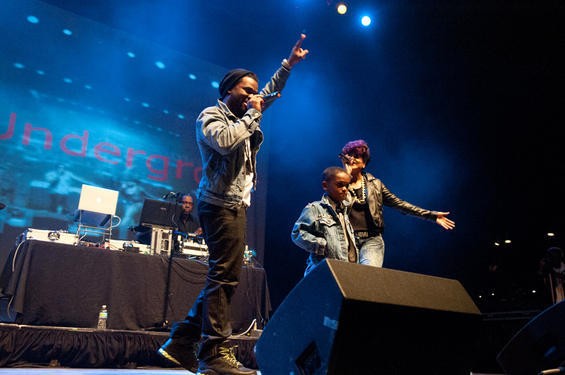 Hip-hop fans who attended the State of Emergency concert earlier this month may have received mixed signals from the show. While some of the artists involved tried to invoke Dr. King's vision -- the show was scheduled to coincide with MLK Day -- most performed songs that were violent or misogynistic in nature. Organizers of Saturday's Hip-Hop 911 concert included crime victims as special guest speakers -- including Theda Thomas, the mother of missing child Christian Ferguson - to ensure that their message would not be diluted.

The all-ages event was a joint effort between local activists, artists and promoters in an attempt to bring young people into the conversation about violence in the community. The inclusive lineup brought together acts from across the spectrum of local hip-hop in order to put up a "united front" for the cause. This strategy proved to be a successful one, as the show enjoyed a respectable turnout which was fairly diverse in terms of age and race.

A group of young singers, dancers and producers called "Teen Swag" set the tone early with a positive vibe and a high-energy performance. Hosts Aloha and Bradd Young then engaged the crowd in conversation, asking for ways violence can be reduced. This was followed by a short set from Jia Davis, who lost his brother (and fellow emcee) Cornelius "Katt" Davis to violence back in 2002.

After a charismatic set from local veteran Nite Owl, a representative for Claire McCaskill read a speech regarding the role of education in crime prevention, and issues such as the ratio of schools to new prisons being built. Rapper/radio personality DJ Kaos addressed more question to the youth in attendance, like why it's considered 'lame' to make good grades.

Tef Poe performed an energetic set as usual, where he advised kids not to put stock in what they see on TV every day. "Don't believe BET, its fake - it's a lie. Your mother is what's real," he remarked. After a performance by the 12 to 6 Movement, Alderman Antonio French raised the staggering statistic that out of 144 murders in St. Louis last year, 125 of the victims were black.

Of the remaining performers, Ruka Puff may have had the crowd more amped than anybody. Ruka urged everyone in the audience to "Just be yourself. Don't try to be like anyone else." Also featured were the Midwest Avengers, Jason Little (who has sang backup for Trey Songz) Kemo (of Da Hol' 9), and D-Boy (who, ironically, was shot at on his way to the show).

Although there were a few changes to the final roster, the concert came together nicely and was generally well received. Whether or not the event will have a lasting impact crime in the city has yet to be seen -- but it was at the very least an excellent starting point, everyone involved should be commended for their effort.