To be a fan of Neil Diamond is a little like believing in Santa Claus. You know that it’s out of fashion and a little bit ridiculous. You know that there is something inherently unbelievable in his persona, and that the hugeness of his stage show is probably as hollow a display as Santa’s Magic Kingdom. And yet when the show starts and Neil comes out center-stage, bathed in beatific light to the strains of “Holly Holy,” it’s physically impossible not to smile, either at the spectacle of a grinning, guitar-toting Neil Diamond or at the fact that “Holly Holy” is a pretty bad-ass song.

If you were smiling in spite of yourself, you’d be in good company last night, as the Scottrade was mostly filled with true believers and life-long Diamond-philes. Dressed in black jeans, a black coat and wearing a turquoise-accented shirt underneath, Diamond didn’t have to work very hard to win over the crowd. After two delayed dates due to laryngitis, the show was a long time coming, and largely worth the wait.

The contrast between Diamond’s last two albums and his live show was evident at last night’s show. While the Rick Rubin-produced 12 Songs (2005) and this year’s Home Before Dark placed Diamond back in the studio with his songs, his guitar and not much else, his live show maintains the glitz and pomp that brought him his greatest fame (as well as no small amount of derision). But this decision to play up his sequined persona was the right one -- these fans didn’t come for an evening of acoustic songs, they wanted the hits. Over the course of nearly two hours and 21 songs, Diamond delivered.

The set opened with a smattering of big- to medium-sized tunes: the aforementioned “Holly Holy,” “Play Me” and “Cherry, Cherry” being the biggest, while album cuts like “Love on the Rocks” got an airing as well. The crowd sufficiently primed (or, as primed as a Neil Diamond crowd is ever going to be), the singer sat on a stool and worked through three tracks from Dark. The title track was suitably slow and introspective, though “Pretty Amazing Grace” added some sparks with a Latin-flecked section.

Self-mythology is the right of any singer who has made it as far and as long as Neil has, and he took advantage of that right with the autobiographical “Brooklyn Roads,” with pictures and home video from Diamond’s New York boyhood playing on the projection screens. He continued the theme with an introspective “I Am…I Said,” which brought some of the more performative aspects of the night. This was one of several moments where Neil dipped into lounge-singer mode, working the stage and strangling every ounce of emotion from the notes. Sadly, this carried over into what may be his best song ever, “Solitary Man”: On record, the song is a statement of purpose and on par with Simon & Garfunkel’s “The Boxer” as one of the loneliest records ever pressed. Last night, it felt plodding, as if Diamond was weighed down by his fourteen-piece band.

If “Solitary Man” was too heavy for its own good, “Forever in Blue Jeans” buoyed the crowd and provided one of the few on-your-feet moments of an energetic but restrained show. The remainder of the show had its high points – the mandatory “Sweet Caroline, complete with a reprise, a dramatic staging of “You Don’t Bring Me Flowers” featuring a back-up singer in the role of Barbra Streisand – but the show ended with an invigorating “America” and the gospel sounds of “Brother Love’s Traveling Salvation Show.” And while Diamond’s show didn’t quite get the crowd rolling in the aisles like an old-time revival meeting, it proved that his sway over the audience is often God-like. 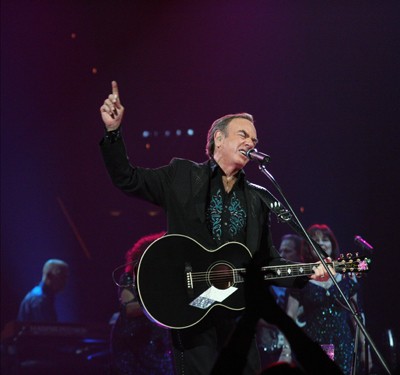