Warped Tour isn't for the faint of heart, especially on a hot August day in St. Louis. But an unforgiving sun didn't prevent the area's bros, punks, misfits, meatheads, horndogs, scene queens, nerds and foxes from converging on the Verizon Wireless Amphitheater for the tour's fifteenth-anniversary jaunt.

Hordes of red-faced kids traipsed between stages in packs, pausing only to buy overpriced food, meet their favorite bands or peruse any number of tents hawking causes, condoms or merchandise. Seriously, Warped Tour exists in this weird land where everything has a product, website, sponsor or company attached to it. But because the punk/emo/screamo subculture is so intertwined with commerce and consumption, that advertising doesn't indicate selling out - and it isn't cause for an ethical or moral dilemma. It's just a name-brand way of life. 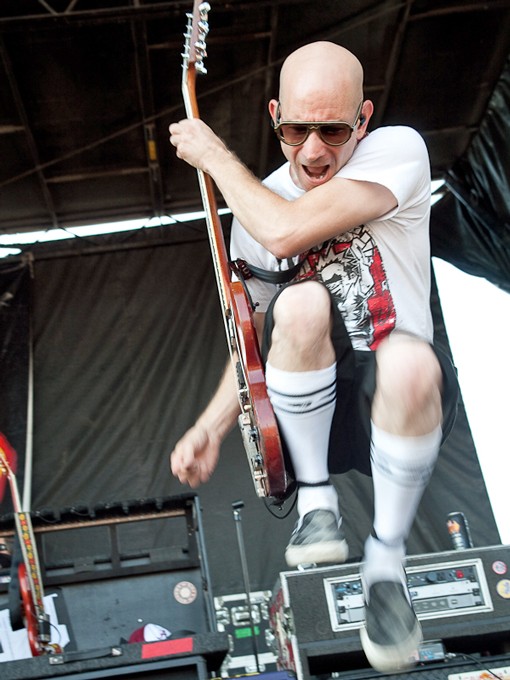 That's perhaps why the no-bullshit, veteran SoCal punks Bad Religion stood out from the pack. Wearing jeans and a black shirt, vocalist Greg Graffin looked like a dad who decided to jump onstage after mowing the lawn and firing up the grill. He gesticulated in a very measured, firm way as he sang, looking every inch like a lecturing college professor (which he certainly is). But the band's set escalated in a fury of fireball riffs, speedy tempos and pure punk fomentations; highlights included "Infected," "21st Century Digital Boy," "Them and Us" and "Requiem for Dissent."

Bouncing Souls, which drew a smaller crowd to the same stage an hour before, performed its pogo-punk anthems mainly to the totally stoked dudes who formed a circle pit from note one. (Seriously, the devoted - but relatively sparse - audience probably explains why the band hasn't played in the area much lately.) "Private Radio" inspired the rabble-rousers, but the more nuanced power-pop of "Lean On Sheena" and a guest spot from Fishbone's Angelo Moore on saxophone didn't go over as well. Neither did a cover of the Misfits' "Hybrid Moments"; the sight of vocalist Greg Attonito with an acoustic guitar seemed to confuse the Mohawks. The ebbing and flowing energy ultimately made the set fall flat.

In contrast, Underoath absolutely packed the same stage hours before. Kids were crowdsurfing toward the stage from 50 feet away as the Florida sextet opened a hellmouth with its monstrous, technical prog-metal. Vocalist Spencer Chamberlain screamed like a vulture and Cooke Monster fighting to the death, but his passionate pleas, Christ-like poses and lyrics came off as a supplication instead of ego-boosting. His bandmates' scorching guitars and hyper-amplified drums weren't too shabby, either.

Aiden vocalist wiL Francis is known for his Twitter musings, so it wasn't a surprise when he ended his lengthy stage ramblings with: "Tell everyone we are not some pussy ass emo band." (Duly noted.) Although his thoughts did end up coming across tiresome, whiny and defensive (in other words, as goth as the dark eye makeup he wore), Aiden's music was a good cross between AFI's dark-punk and My Chemical Romance's theatrical macabre-rock. And party-ska Bostonites Big D and the Kids Table - which brought with it a horn section and adorable back-up singers who wore matching dresses - was the perfect soundtrack to a summer's afternoon.

Not everyone was so successful. Hit the Lights' set was generic and, at worst, annoying - mainly due to stage banter that seemed to think that using the word "fuck" was edgy and paint-by-numbers punk-pop. Ivoryline was even more generic emo-pop, while earnest, sweet-voiced singer-songwriter Alana Grace seemed entirely out of place among the clashing guitars and screaming. And Black Tide - a group of Miami teenagers barely beyond puberty - sounded like the Muppet Babies version of Metallica.

This year at Warped more than ever, the division between scenes (and bands within those scenes) felt more pronounced. The sullen dudes wearing Bad Religion hats wouldn't be caught dead at, say, the crabcore of Attack! Attack! or rap-rock act Brokencyde's "autism crunk." (Blame/credit Jason Pettigrew for that last descriptor.) And the kids sporting high socks, neon accoutrements and cartoonish band T-shirts seemed bored by the heritage acts. Adolescence is marked by wearing the "markings" of the group to which you belong/identify with - but in past years, these demarcations seemed far more fluid and far less final.

But you know, in the end, Warped Tour isn't for music critics to dissect. It's for sixteen-year-olds to go to and hang out all day, hoping to catch a glimpse of that cute boy from school - who just might have grown cuter over the summer. Or a place for music fans to experience sensory overload, get a little sun and remember what it's like to have your worldview shattered by a new album from your favorite band.

Critic's Notebook: Locals the Disappeared won a contest sponsored by Alternative Press magazine (full disclosure: I write for them) and performed at the event. The band's new EP, The Radical Miracle, is out, and it's planning to record a full-length soon.

Funniest Moments: At one point during Bad Religion's set, Graffin started straining out the chorus to Van Halen's "Everybody Wants Some!!." The rest of the band gamely tried to bash out the chords, but couldn't quite string together the right notes. He made some crack about how "Van Hagar" was inferior VH. They then asked the crowd, "How many of you have heard of Van Halen?" A slew of hands shot up. Tellingly, even more hands shot up when the same question was asked, with "Bad Religion" replacing VH.

Personal Bias: A few years ago, I went to the Kansas City Warped Tour just for the Buzzcocks. Unsurprisingly, they pretty much slayed - in fact, the last five minutes of the set crammed in "What Do I Get?" "Orgasm Addict" and one other classic jam.

Why yes, that's DAVID BOWIE IN LABYRINTH. On this girl's arm. Amazing.