It was the end of the week of the end of the world (to paraphrase Jon Stewart) and (to paraphrase Michael Stipe) everyone felt fine. More than fine, judging by the smiles, clapping hands and dancing (mostly, sometimes not quite) bodies squeezed (but not jammed) onto the dance floor at the Old Rock House. It was Friday night and Frightened Rabbit was making its debut (a sell out) in St. Louis.

What the hell, let's find out if a good rock show (to paraphrase the late Eddy Arnold) can make the world go away.

After a week in which Nashville flooded, Greece burned, the stock market freaked, and Times Square was nearly blown up, we could all be forgiven for feeling like frightened rabbits. The fearless, if-not-quite peerless, Scottish rock band, led by supremely unpretentious and sweat-drenched singer Scott Hutchison, slayed for an hour plus. Everyone (or nearly) sang along. With a blur of tightly harmonized electric and acoustic guitars, keyboards and a flood of songs so earnest, direct and pure (in their own twisted way) it felt like the shitty old world really might go away -- or at least right its wobbly axis. 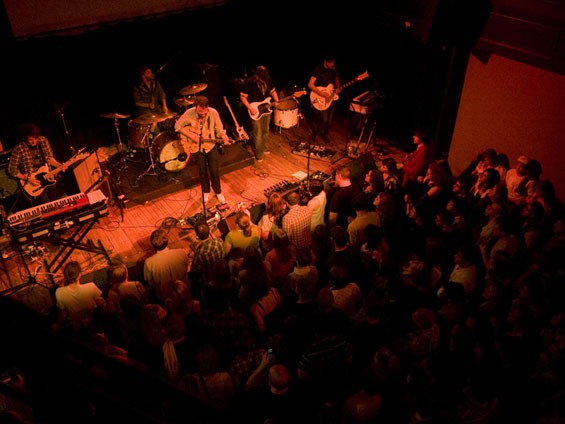 A sell-out crowd at the Old Rock House means you either hang back and watch the proceedings from the TV monitors and big, dim screen, or break the bottleneck to the dance floor to stake out a spot while the opening bands conduct their obligatory rituals. In this case, Our Brother the Native (from Ann Arbor) started out with a barely coherent smashup of raver-trance mush, geometric post-rock, pedal-fucked-xylophone-and-trumpet-blonkage, free jazz drumming, and Vampire Weekend guitar jingle. Dynamics were good; songs, if they existed at all, were not.

Maps and Atlases (from Chicago) followed, rocking the Urban Woodsman (or Urban Methuselah) look, and getting some tangible melodic and groove results from their advanced math classes and careful study of Stanley Jordan DVDs. Like your guitar fret board noodling free of backbeat? Here's your band. Memo to indie festival kids: Dance to this stuff, even when the drummer gives you more cowbell, and you risk making Beatle Bob look like Fred Astaire. Better to try murmuring along with Dave Davison's nervously pinched but charming vocals or just clap along when So Many Dynamos march on stage with bass drum and even more cowbells. The fun (if now predictable) indie drum circle turned into a mass sit down, and the crowd, without protest, crouched as one. A gimmick? Sure, but also a genuinely sweet moment.