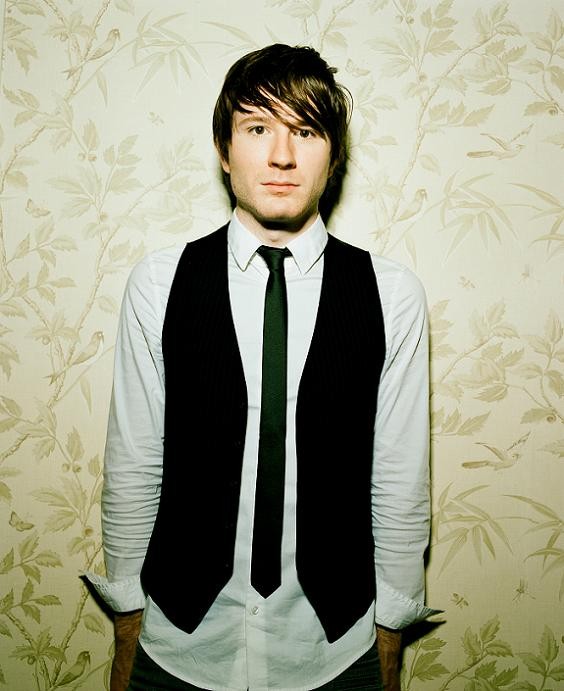 There was not a computer to be found on the stage at Owl City's Pageant performance last night. That may come as a surprise to those who think of the band's singer and mastermind Adam Young as a "laptop artist," one who creates his music without much input from "real" (read: non-digital) instruments. Where Young's recorded output often suffers from the sterility and confinement of computer-driven compositions, his live show takes the building blocks of his songs and layers on several coats of exuberant live instrumentation.

That's not to say that Owl City's show was 100% live and of-the-moment: there were certainly drum machine beats, and I don't doubt that some unseen hand was triggering loops and samples offstage, but the show succeeded in bringing Young's delicately crafted MIDI symphonies to life without sacrificing the breathless wonderment that courses through his lyrics.

Casting his songs with a full band worked to Young's advantage. Freed from his computer, the singer, guitarist and keyboardist was able dance, preen and interact with the crowd. The lithe, lanky Young seems to have made peace with his status as a teen idol, and he was greeted to a chorus of eardrum-piercing squeals from the tweens and teens packed into the Pageant's dance floor. (Unsurprisingly, the young crowd left the venue's 21-and-up areas relatively uncluttered.)

From the show's start, it was clear that Owl City wanted to assert itself as a band and not an electronic pop project. The show opened with "Umbrella Beach," as some melodic interplay from the violin and cello players introduced the theme before the drummer and the vibraphone/keyboard/guitar player kicked in. With all the pieces in place, Young approached his keyboard rig and pumped out the song's bright, cheery chords. Owl City's most aggressive (to use the term liberally) moments have the buzzy simplicity of European disco-pop, and "Umbrella Beach" set an upbeat tone with the song's brick-to-the-head lack of subtlety.

For an artist who has made his name through keyboard-based songs, Young spent more time with his guitars than he did with his synths. "The Bird and the Worm" featured his acoustic guitar playing, and later in the set, "Cave In" featured Young and the multi-instrumentalist squaring off with loud electric guitar chords, all intricately timed to the light show. It was an old arena-rock trick, but it worked to bring some rock & roll grandeur to the proceedings.