Other than chilly winters and an unquenchable thirst for malted hops, St. Louis doesn’t have a whole lot in common with its neighbor to the frosty north. Still, the turnout last night for the all-Canadian bill at Wash U’s Gargoyle Club, featuring Montreal’s Wolf Parade and Listening Party from Victoria, B.C., was impressive. Perhaps it is a testament to the transcendence those Canucks have when it comes to putting out some of the finest indie rock the genre has to offer.

Wolf Parade, touring in support of its second full-length album At Mount Zoomer, was simply fantastic.

The band, which was spotted making itself at home in its tour bus before the show by playing video game hockey on a giant projector screen, was pleased to see the packed house, remarking that when they last visited four years ago they played to three people at the now-defunct Rocket Bar.

This time around, the quintet played a dream setlist that featured sixteen songs, all from its two latest releases. They opened with the standout from 2003’s Apologies to the Queen Mary, "You Are A Runner and I am My Father's Son," a driving, epic number with complex rhythms that perfectly embodies their fresh take on Canada’s proud prog rock tradition.

Pleasing was the fact that the band was able to replicate their booming sound and distinctive, yelping vocals despite the poor acoustics in the tinny basement that is the Gargoyle. Earlier this year, the performance by Band Of Horses, whose cascading, reverb drenched guitars are similar to Wolf Parade’s, was spoiled by the subpar sound. 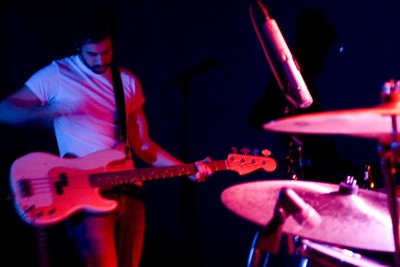 The ability to nail co-frontman Spencer Krug’s idiosyncratic howls was essential on songs like "Call It a Ritual." The song started of a touch slower than its recorded counterpart and, like many of the band’s songs, built to a frantic crescendo. Along the way, Krug, seated center stage at a keyboard, rhythmically bobbed his head and bellowed the haunting vocals that betray his baby face.

On "Language City," Krug's vocals took a backseat to the stylings of guitarist Dan Boeckner, who wailed as he did throughout the entire set. Boeckner, like Krug, has a knack for writing a catchy refrain or chorus and boiling it down to one word that he shouts over and over as the band brings it home.

While Krug tends to pen the sprawling, outlandish songs that mark his work with his other project, Sunset Rubdown, Boeckner, sporting just a teeny little Canadian neck warmer for a haircut, seems to be the one who harnesses that style and transforms it into an epic, anthemic sound, big enough to fill a frozen Canadian tundra.

Frankly, I can't praise last night's performance enough. The band was enthusiastic and animated and even stopped to pepper the crowd with pithy banter (including the news that this was the last show guitarist Dante DeCaro, formerly of Hot Hot Heat, would be playing with the group). [Ed. note, Monday 11/10: Just kidding -- thanks, Pitchfork.] Eschewing the pretension and irony that castrates many of its indie rock peers, Wolf Parade crafts compelling, complex songs that rock even harder live than they do on the records.

Finally, I'd be remiss if I didn't mention the performance of the opening act, Listening Party. A trio of bearded British Columbians, they used a lot of tribal chanting and drumming with looped vocal harmonies, similar to the San Franscico band The Dodos. Still, it was very organic—keeping with that distinct Pacific Northwest heavy-reverb rock sound.

The boys made a point of giving several shout outs to their hometown of Victoria, despite the fact that just about zero people in the crowd sounded like they knew where the city is in Canada. All I know is that all the Canuck talk had me craving a frosty Labatt’s Blue or maybe even a Kokanee, but tragically, the Gargoyle is a dry venue.

Setlist: You Are A Runner and I Am My Father’s Son Soldier’s Grin Call It A Ritual The Grey Estates Sons and Daughters Language City An Animal In Your Care Shine a Light Grounds for Divorce Fine Young Cannibals California Dreamin’ This Heart’s On Fire Kissing the Beehive -----Encore------ It’s a Curse I’ll Believe in Anything Fancy Claps