Review: The Aquabats, Mustard Plug and Samuriot at the Firebird, Sunday, March 21

MC Bat Commander's ill-fitting uniform barely contained his pot belly as he announced, "It's been seven years since we've played here, but we've been working out the entire time." Later in the set, he pulled three children from the front row on stage and chucked them one

Ryan Wasoba
A tattoo spotted last night at the Firebird

by one into the audience to crowd surf, as if baptizing them in the name of punk rock. Blame it on the Aquabats' St. Louis date landing on a Sunday, but the band's sold-out show at the Firebird recalled a religious revival. Each responsive shout from the congregation - mostly underage and sugarbuzzed - felt like an "amen" screamed in agreement with the group of wannabe superheroes.

While the evening's other acts, Mustard Plug and young locals Samuriot, proved a more direct belief in the denomination of ska, the Aquabats preached a doctrine of overall levity. While never abandoning the genre of its roots, its new wave and synth pop influences have become more prominent as the band has shed members. Currently a quintet, the band boasted a whopping eight members on 1997's The Fury of the Aquabats.

After an overtly dramatic opening montage projected upon the band's makeshift video projection screen, its members ran on stage in full garb: silver skull caps, black goggles, light blue body suits with the letter A emblazoned upon each, and giant belts like those awarded to WWF champions circa 1986. Bat Commander had a fake mustache drawn on his face while an ironic Dean brand metal guitar hung from the neck of Eagle "Bones" Falconhawk.

Early in the set, Falconhawk busted into a solo during one of the band's rockier mid tempo tunes. Leaning over the audience in a rock star pose, he simply shredded his ass off, fingertapping and pulling showy moves of Dragonforce-like caliber. The gesture summed up the Aquabats to a tee: While conceptually wacky, the band's musical execution has always proven its legitimacy. "Cat with 2 Heads!" was dense with the twisted science lab sonics of a 1950's horror film. Team player Jimmy The Robot switched from synthesizer to saxophone for conventional ska tracks "Martian Girl!" "Pizza Day!" and "Super Rad!" 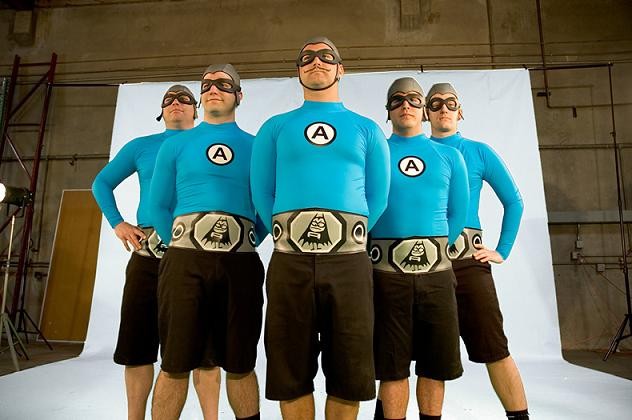 But in case five wannabe superheroes flailing around wasn't enough visual stimulation, the band's video screen displayed a brain-melting collage of stock footage and bizarre flashes of absurdity. Rather than perform to a sequenced tempo, a hidden man with a laptop (the sixth Aquabat?) controlled the visuals in real time. This allowed the band to bash through its tunes with all the looseness of its punk rock core, while still emphasizing the songs' choruses and intense bridges with appropriate visuals.

The only person at the show who may not have loved the Aquabats' video screen was the drummer of Samuriot. During the band's closer - a Rush song which they made "skankable" - the screen kept falling on his back. He stayed in good spirits, pushing it away from him whilst keeping up with the group's straight-forward set of punky third wave ska.