Photo by Mabel Suen
Don't have a cow, man.
When Blank Space owner and proprietor Kaveh Razani took the reins of the massive, multi-floor 2720 Cherokee earlier this year, he brought changes to staff, décor and booking in one fell swoop. But before the deal was finalized, Razani met with self-described gamer Rob Fulstone to discuss an addition to the complex: an arcade. And not a “barcade,” mind you, but a real arcade — by gamers and for gamers.

Less than a year later, RKDE can be seen from the street, lighting up the building's second-floor mezzanine with a bevy of bright screens.

“In taking over [2720] I think that we kind of realized that 20,000 square feet across three floors is really, really difficult to manage just strictly off of events. We wanted some component to be engaging,” Razani says. Cherokee Street's bustling bar scene inspired the venue owner to provide what he calls a “plus or extra.” 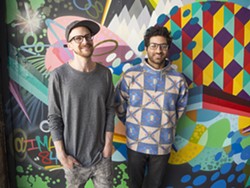 Photo by Joseph Hess
RKDE co-owners Rob Fulstone and Kaveh Razani
Enter Fulstone. A father of two also known around town as DJ Crucial, Fulstone has never been shy about his game collection or his status as a hobbyist. From building a custom arcade for his Super Nintendo to modding ROMs on PC, Fulstone is familiar with both gaming hardware and gaming software. His time spent with his wife's family in South Korea — and, specifically, in the country's arcades — left an indelible impression as well.

When they met over coffee, Fulstone acknowledges, “I was full of opinions. Everyone wants to play Galaga and Ms. Pac-Man, but every laundromat has that. Some arcades don't even have good fighters to me. I wanted to go beyond just Street Fighter II Championship Edition. Let's step it up."

And so RKDE offers multiplayer classics such as the Simpsons and Teenage Mutant Ninja Turtles (the second one, Turtles in Time, to be specific), along with two deluxe light-gun classics in Time Crisis 2 and House of the Dead 2. Sports favorites are offered, with both NBA Jam and NFL Blitz, while racing fans can drift the mountains of Japan in Initial D 3rd Stage. Bog-standard classics are also represented, with restored cabinets of Galaga and Ms. Pac-Man alike.

“I wanted to make an impression that we're not gonna be the same arcade that you might think,” Fulstone says. While much of the stock are the tried-and-true classics of '90s gaming, RKDE differs from other barcades in middle America with its stock of Japanese machines: A total of eight Sega Blast City cabinets were purchased from Chicago vendor Windy City Gaming.

“With Japanese [cabinets], you can just change the game board and sign,” Fulstone says. Many domestic cabinets are dedicated to one game, yet these machines allow operators to change games with relative ease. The Japanese cabinets come outfitted with competition-grade Sanwa joysticks and buttons. 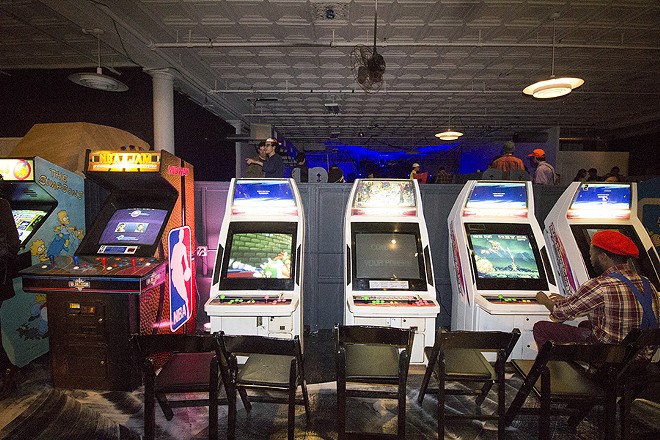 Photo by Mabel Suen
Just a few of the machines at RKDE.

“We want to be the gamer's arcade," Razani adds. "I think Rob pays more attention to this kind of stuff than anyone I know. There's a huge difference between doing it yourself and having a vendor come in with this traditional model of an arcade of rotating stuff out."

Razani estimates the initial investment at roughly $10,000, but full ownership allows for a level of control in both operation and management.

“We didn't want it on the main floor, because what happens when we have a gigantic show? What's that going to do to the arcade?” Razani says. The pair initially planned to put the arcade in the basement, but the second-floor mezzanine ultimately seemed a better choice, providing a subtle division from the stages without leaving patrons to suffer from the noise of a show overhead.

The attention to detail makes RKDE more a stand-alone arcade than a sideshow to the venue. As of press time, four of the eight Japanese cabinets are active, with X-Men vs. Street Fighter, DoDonPachi, Metal Slug 3 and Mario Kart all on offer. Fulstone assures more will be up and running in due time, with a variety of other games such as Marvel vs. Capcom and Radiant Silvergun, among others.

“We won't have a game on the floor that people don't know if it's working," Razani explains. "It's pretty clear. The ones that are unfinished say 'coming soon' and they're where they need to be.”

The duo is eager to invite the community as the space continues to evolve. They want to field requests for games and welcome players of many kinds: A room will be set up for virtual reality and tables will be available for Magic: The Gathering and other card games too. Sandwiched between the second floor's stage and the bevy of arcade machines is a pair of pool tables, which makes RKDE the only spot on Cherokee Street for billiards. A small second-floor bar offers a curated selection of drinks from the main floor, but Razani plans to stock up on plenty of non-alcoholic drinks, too.

As of now, admission to RKDE is free, while every game costs the same flat rate of one quarter per play, even the deluxe machines that typically net a dollar per credit. Fulstone and Razani would rather welcome patrons to hang out and play as much as they like as opposed to charging a cover.

“We want people to feel like they're chilling somewhere that they want to be," Fulstone says. "It's a work in progress and Wednesdays are open houses. Come check out our progress."

[An earlier version of this story incorrectly identified one of the co-owners as Rob Fulston. His last name is spelled Fulstone. We regret the error.]