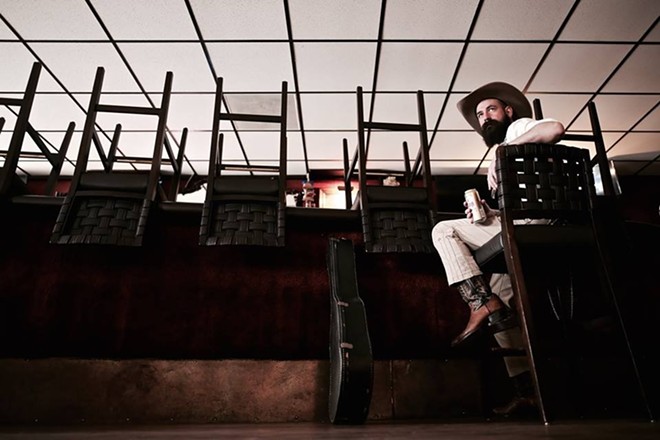 NATE BURRELL
Once again in 2018, ​the RFT recognizes ​St. Louis' ​unparalleled musical talent by presenting the STL 77, ​our list of 77 acts who did big things in the last twelve months. From now through June 16, the kick-off date of our huge two-day music festival ShowcaseSTL, we'll be announcing two ​honorees per weekday on our music blog. For last year's STL 77 picks, go here; for the complete lineup for ShowcaseSTL, go here.

Ryan Koenig's 2017 solo LP, Two Different Worlds, found the throwback country iconoclast crafting heartfelt story-songs on which his creased-leather voice takes center stage. The musician's simple Facebook bio underscores his collaborative approach to music, however: "Been playing music for some time now, with people I've known for some time now. Trying to have been a friend to a friend everywhere I have been." Those pals certainly stepped up after a December 2017 accident left him with hefty medical bills. A YouCaring fundraiser brought in over $30,000, which gave the musician enough of a cushion so he could recuperate at home and get back to doing what he does best: play music with his buds. Koenig is, of course, a core member of Pokey LaFarge's band, which gave him a chance to play on Jack White's Blunderbuss; he also performs with fellow vintage country purveyor Jack Grelle and has over a decade under his belt with ramshackle blues-folk act Rum Drum Ramblers.

Recommended If You Like: AM radio stations playing classic country, a laid-back afternoon at the Newport Folk Festival