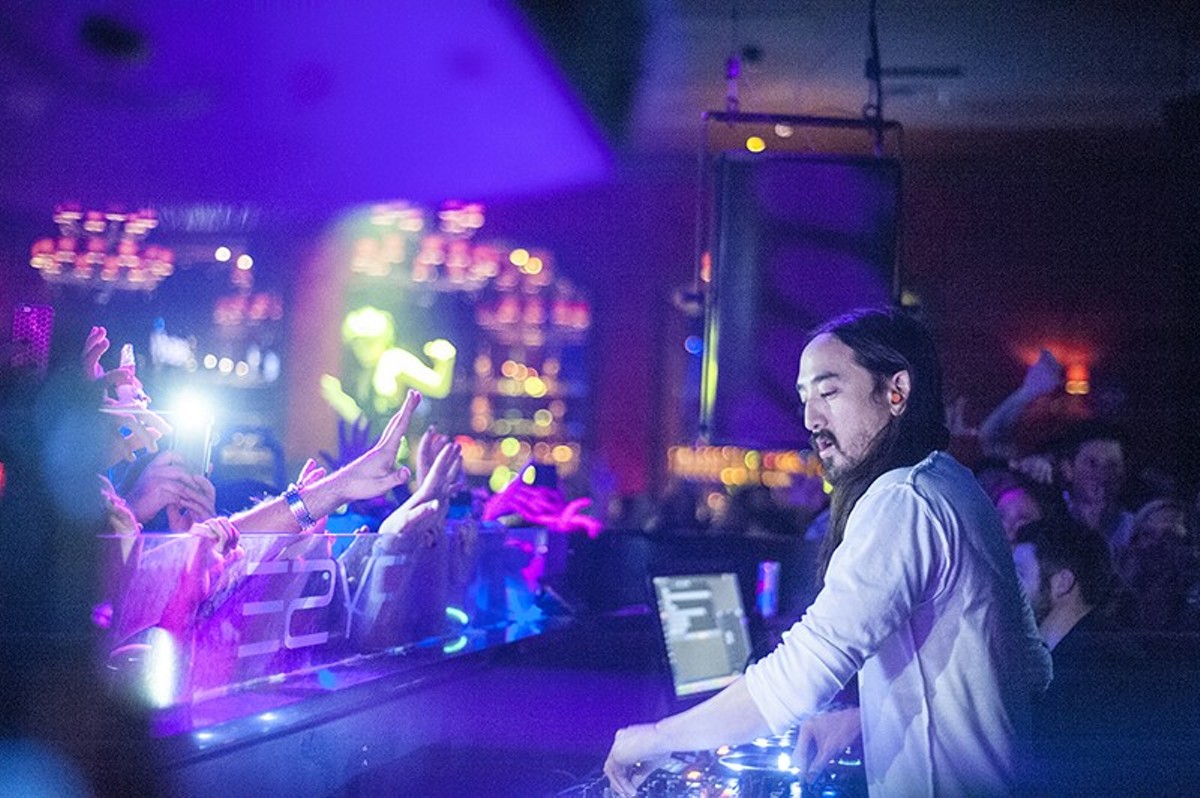 Steve Aoki spins a set at RYSE on January 28. PHOTO BY KELLY GLUECK

The biggest dance party in St. Louis these days isn't in the city. It's in St. Charles, where the nation's top EDM acts are keeping the beats going into the wee hours of the morning at RYSE, which opened last fall in the Ameristar Casino.

EDM, or electronic dance music, takes its cues from the realm of anything synthesized, laden with break beats or electro-raving mad. Drum and bass thunder continuously in a constant loop amidst keyboard chirps and sonic soundscapes. There are swells and lulls, peaks and valleys, but one thing is for sure — your rave will last all night.

Previously, the space was Home Nightclub, which closed after a few years. RYSE opened in its place in October under a new name and marketing strategy, retooled and rebranded to deliver a quality lineup of national and local DJs.

The club now features a swanky lounge that acts as a primer to the main venue, with plush velvet and leather sofas, giving crowds a chance to mingle with cocktails before getting their groove on. Inside the music venue, a lowered dance floor is surrounded by two huge bars and red leather VIP booths. Craig Cooper, multimedia manager for Ameristar Casino, isn't certain how many lights are installed in the ceiling above, but he says a serious amount of research went into the new concept.

"We started more than a year ago, we went out to Vegas and hit the club circuit — we hit everything. The thing that we figured out is that it's all about the DJ and the room," he says. "The room has got to be cool. People need to think that it's really fun — the lighting, the video — if they enjoyed it, they'll want to come back for a DJ they don't know, because they know we're consistent with what we do. It's going to be safe, it's a good time, people can get around and it's a grown up place. There's parking, theaters, restaurants nearby and then this massive dance club — it's a unique venue."

That uniqueness even extends to the audio improvements they've made. Typically, most clubs feature surround speakers, with sound engineers and DJs who are so keen on pushing the envelope, the resulting rib-cage vibrato loosens your insides. But while RYSE is ready to party, it's not eager for customers to part with their hearing.

"We upgraded the audio enhancements, which enable us to control EQ and audio levels a bit better," says Cooper. "We want people to enjoy it, not go home with your ears ringing for three days."

The sound system runs through a virtual mixer on an iPad that can be taken to any part of the club in order to make sure the levels are perfect. "The DJs can mix to what they want to hear in the booth monitors and then we can stand out in the crowd and make sure the customer can enjoy it," he says. "The DJ is not out where the fans are so they might not know what they're doing or how they sound out here. You want to be able to have a little bit of a conversation out here, and then we keep the louds a little quieter in the lounge so people can chill."

In an environment like this, that chill-factor is a serious priority. "If you don't have the customer in mind, there's a good chance the DJ is going to push the levels. And this system has a lot of power, which is great — it will get loud, but in a clear, undistorted kind of way, because there's plenty of headroom. We don't even get into the red."

And that noise level, Cooper promises, will not disappoint any EDM fans. "In the red, in this type of space, it would be so loud it would be almost painful."

In addition to the lasers, confetti and cryo machines, Cooper says fans will love the artists performing — "St. Louis is getting spoiled right now; our lineup is really nice." In the spring, local acts Rob Lemon and Notaker will follow more national acts, including Arty and Cash Cash. The big ticket winner for January was Steve Aoki, who specializes in a raucous night of superior electro-house music that results in his signature move: slinging sheet cake at the crowd. Fans go crazy for it.

PHOTO BY KELLY GLUECK
Aoki tosses cake into the crowd.

"It will sell out and we can't sell any at the door unless people leave," Cooper promises in an interview before the January 28 show. "But people never leave."

If it sounds too good to be true, there's a catch. At this point, RYSE is only open one night a week — every Saturday from 9 p.m. to 3 a.m.

"We thought that maybe we could do more nights, but we really just wanted to do one night, really really well," Cooper says. "And when that night is running well for long time, we'll start doing more research."

Cooper's ultimate goal is to grow the St. Louis area EDM scene as much as he can. "The biggest thing that we hear is people questioning the longevity, and we're building it to do the same thing for as long as people will come out and enjoy it," he says. "I think this type of music can take most people out of their comfort zone, further than they think it will — the lights are darker, you meet lots of interesting, cool people that you wouldn't run into normally — people who just like to shake the cobwebs off every once in awhile."