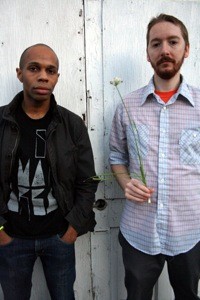 Last week, via Facebook, the electronic-based hip-hop duo, Safety Words announced that it will be on an indefinite hiatus. Safety Words is the long-time collaboration between Ian Jones (DJ Parisian) and Sean Price (Doctor Phelonius). Known for their ability to craft hyperactive hip-hop out of 8-bit Nintendo hooks, Safety Words' elegant approach and cosmic sheen set them apart from the average chiptune producer. 2009's The Ghostfaced Pixels Mixtape remains a solid document of Safety Words' vast talent and dedication to the craft.

Although the current hiatus has been cemented, Jones has already been keeping himself busy with his Parisian project. "I'm sitting on two EP's right now, working at a 3rd. I've got a decent amount of stuff, but I don't think I'll put anything out for a little while," says Jones. "I don't really know what my objective is releasing stuff as Parisian. It's just me. I don't have to account for anyone else's feelings, or misrepresenting someone else; none of that. I feel like this is a lot more personal, as personal/intimate as I can be with wordless songs."

More akin to the likes of Phaseone and Flying Lotus, Parisian's atmospheric sound lies in the abstract electronic realm. "A lot of the Safety Words stuff was pretty heavily hip-hop influenced, and while I enjoy making hip-hop (especially with Sean), I don't actively listen to it. This isn't all loops and beats; I feel like I can do whatever I want; it's a better representation of me." Says Jones, "Sean was the most prolific beatmaker I know, and his writer's block kinda scared me. So I'm building a catalog before I start releasing things, while I'm inspired enough to keep creating."

You can check out more of Parisian's work on Soundcloud. He is DJing at Atomic Cowboy on Thursday, December 22nd as a part of the High Life.