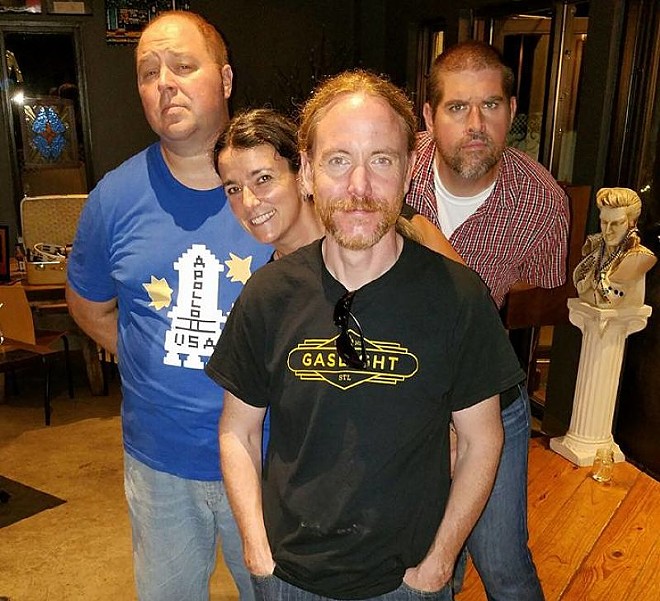 While many bands use the recording studio as another instrument in their arsenal — spending countless hours crafting and honing and tinkering — there are plenty of groups who need the shared, communal experience of a live performance to make their songs shine.

For Salt of the Earth, a long-running folk quartet whose songs tend toward the spiritually ruminative and slice-of-life introspective, the stage has proven a more conducive environment from which to share its songs and stories. Its newest album, Unspoken, presents thirteen new original songs as recorded in concert at the Riverfront Cultural Society in New Haven, Missouri.

Lynne Reif, who plays guitar and, along with Mike Schrand, splits lead singing and songwriting duties, describes the venue as "one of our favorite places to play." Not unlike Maplewood's Focal Point — where Salt of the Earth recorded its last live set in 2012 — Reif calls the Society "a music listening room. People come there to listen. It's this old rustic space, with wooden chairs and wooden floors, and it has that earthy, down-home feel to it. The crowd couldn't have been more receptive."

That friendly crowd and welcoming space had an uplifting influence, according to Reif. She says that while the band has no trouble communicating regardless of the setup, the back-and-forth between artist and audience has a palpable effect on the songs themselves.

"I think we relate to each other the same, which is this incredibly comfortable relationship we have at this stage of the game," she says of the band's interpersonal interactions. "[Studio recording] is a little more artificial, to be in different sections of a room and listening through headphones. That's the barrier — those pieces you have to have in place to record. In these last two live records, I feel that the songs get better. There's a groove that happens."

The groove asserts itself more in the good vibes and audible warmth with which the band performs. Reif and Schrand have been playing together since 2003 and this current lineup, with Jake Brookman on cello and Jim Hieger on guitar, congealed in 2005. Its vibe is resolutely mid-tempo and genteel, emphaszing the song's lyrics and letting the instrumentation — Brookman's cello especially — offer a resonant counterpoint.

Reif's songs often contain some emotional heft but carry the burden well; many of her offerings address a spiritual thirst or existential yearning while staying rooted in the here and now. "The whole time I've been writing, I've been moved typically by a moment in time, where I am present for something that I feel a strong reaction to, and it starts to form an image in my mind," she says. "They certainly have a spiritual sense to them in searching for the meaning in whatever the moment is. When it started, it was moments of hardship. As the years have gone on, it's been more the power of moments and relationships."

On the album, Reif's "Sine Nomine" is a standout that deals with the kind of clarity that comes with age and experience. "I was reflecting back on choices I've made all the way back to childhood," says Reif. "It was like I had a clear view that those choices that seemed weird, they were the absolutely the right choices for me." In the chorus she intones "so we pray," less as a traditional religious offering, Reif says, but as a reminder to unburden ourselves. "In the song there's soul-searching, and then there's trusting that things are unfolding the way they are supposed to."

Reif and Schrand trade songs back and forth throughout Unspoken, and they're different enough songwriters to give a mild sense of whiplash as they pass the mic. Schrand's songs are more up front with wry, often self-lacerating humor. As the disc progresses a few of his tracks — "Put It Down" and "Spot on a Hill" in particular — take a long, wizened view of middle age and the insight that it has brought.

"I used to say that his songs were like rambling ranch houses — they kept turning corners and I never knew what corner was coming up," Reif says of Schrand's songs. "Today, when I hear his songs, they are in some centralized location within him."

That the two songwriters have found their concerns at a point of convergence may not be surprising for a band nearing its fifteenth year together. And on Unspoken, the without-a-net aspect of live recording serves to underline the wordless communication between these musicians.

"We're older, and I don't know if we're wiser, but we have more life experience," Reif says. "What you're hearing is more reflection than struggle. It's contemplative — we're on the other side on a lot of these paths that we've walked."