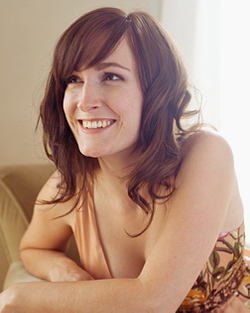 For jazz singer Sara Gazarek, satisfying an audience isn't necessarily about dazzling them with displays of virtuosity. "The truth is, I think what people generally want walking away from a musical experience is to feel something different than when they first walked in the room," says Gazarek, who's performing Saturday night at the Sheldon Concert Hall, 3648 Washington Blvd.

Finding an emotional connection also is one way Gazarek is able to bring new life into venerable material such as "Cheek to Cheek," a song ostensibly about ballroom dancing that she found evoked memories of going to the movies with her first boyfriend in high school. "The essence of that song is being with someone for the first time, and not knowing where it's going to go, and I think anyone can identify with that," she says.

Mixing standards with material from contemporary writers and, increasingly, her own songs as well, Gazarek (pronounced ga-ZAR-ek) has been providing jazz listeners with that sort of alchemy since her first album, Yours, was released in 2005. A native of Seattle, Gazarek had moved to Los Angeles in 2000 to study music at the University of Southern California. There, famed bassist and educator John Clayton and others in the industry began to take notice of her talents while she was still an undergrad.

In 2003, she won the Downbeat Award for Best Collegiate Jazz Vocalist, which led to tours with veteran singers Karrin Allyson, Diane Schuur and Oleta Adams. "I learned a lot at USC, but I was very fortunate to go on tour with them," says Gazarek. "Just watching them interact with the band and the audience, how they talked to club promoters, how they emoted - that was at least half of what I consider my undergraduate education, on the road with them."

Though it's been five years since Gazarek's second album, 2007's Return To You, she's stayed busy with live gigs and, among other things, getting married; traveling to Germany in 2010 to write, record and perform with the group Triosence; and teaching at her alma mater. Now she's also got a new album, Blossom & Bee, ready for release in June on Palmetto.Records. "It has been a while," she acknowledges, "but sometimes you really need that break to develop your voice, not just literally, but figuratively as well."

The album's title is a nod to the late jazz singer Blossom Dearie, but Gazarek stresses that it's not a tribute record as such - "I'm not riding on her coattails," she says - but rather an acknowledgement of influence. "When we knew we were going to be making a new record, and I looked at seven or eight songs in our book that had to be on this album, there was a common thread running through all of them - that they all had been inspired by Blossom Dearie," she says. Blending the likes of "Tea for Two" and "I'm Old Fashioned" with an unexpected take on Ben Folds' "The Luckiest," and some original songs, the result is something Gazarek calls "a lot more mature, a lot more indicative of our live sets, and a lot more indicative of who I am as a person."

The audience in St. Louis will hear a mix of new and old material, she says. "We will have some stuff from the new album - we always like to revisit some of our more classic material, but we definitely are excited about the new record."

Gazarek will be accompanied by two longtime associates, drummer Zach Harmon and bassist Sam Minaie, but fans who have heard her records or saw her previous appearances here at Finale Music and Dining or Jazz at the Bistro will note the absence of her longtime pianist Josh Nelson, who's somewhat less available these days since landing a gig backing singer Natalie Cole. "It's challenging," says Gazarek. "Going into our musical relationship, both Josh and I kind of imagined that we'd have this musical marriage for the rest of our lives. And a lot of the material is very piano heavy and very reflective of Josh's influences."

Nevertheless, Gazarek is embracing the changes brought by pianist Matt Politano, who's playing her St. Louis show and other dates this spring. "He's a phenomenal player, but he has a different approach in terms of voicings and touch," she says. "He does a really great job, and that's kind of the business of this music, that it's different every single time you play it."