Schwervon! Moved From NYC to the Midwest and Never Looked Back 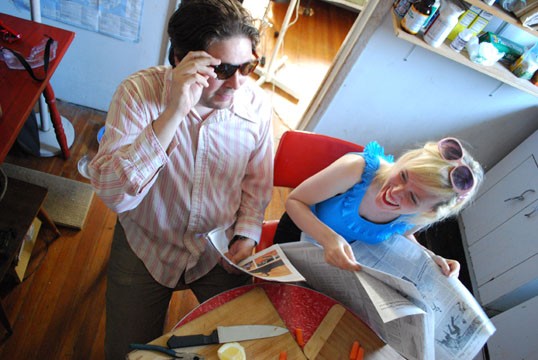 New York City is a wonderful place to live, but it can be hard to make ends meet if you want to focus on your art. Such was the dilemma that Matt Mason and Nan Turner faced in 2012. As Schwervon!, a guitar/drum duo, the two had recorded a few albums, toured the U.S. a bit and made a few forays into Europe. When they wanted to focus on music full time, they faced a tough choice. Either they could stay in New York City, where they were about to lose their rent-stabilized Lower East Side apartment, or they could pursue the idea Mason proposed: relocate to the Kansas City area, where he grew up. The Midwest won.

"I know it sounds a bit counterintuitive, but moving from New York City to Kansas City provided us with a more affordable place to live and a more central location to start a serious DIY touring regimen," explains Mason. "About four or five years ago, my dad got diagnosed with lung cancer. I flew back to Kansas and hung out with him for a month while he dealt with that. He's better now, but while I was here, an old friend kind of turned me on to some of the cool stuff that had developed around town. We looked at a couple of places in Brooklyn, but most of them were half the size and twice the money. So I went to Nan with the idea of moving to Kansas. Luckily she was up for it."

In the intervening two years, Schwervon! has continued at a fairly relentless pace. This weekend the group returns to St. Louis. On Friday, April 18, Schwervon! is scheduled to play the Heavy Anchor. On Saturday, April 19, the duo will appear at Euclid Records as part of the store's Record Store Day festivities. We took the opportunity to e-mail the group about music, relationships, touring and mid-set performance-art breaks.

RFT Music: How are you liking it in the Midwest? What are some similarities/differences operating as a band in Kansas versus New York? Be honest, do you miss New York?

Nan Turner: I like the space and the big sky and the barbecue in Kansas City! It's sort of the same for us in terms of our strong internal drive to work on our music. It's just that in the Midwest now, we have more time to work on our music and tour, as we are less chained to day jobs. Of course we miss New York, our friends and the crazy creative energy of that city. But it's nice to go back on tour and appreciate it and soak it in, maybe more than when I lived there.

Matt Mason: New York is a great place to be inspired, but it's a tough place to live. There are more opportunities but also more competition. Unless you have a lot of money or are in a unique situation, I think it's a tough place to focus on your craft. Since we've moved to the Midwest, we've been able to slow down a bit and think more about what we really want. It's also kind of fun to have insight on both parts of the country. We've been fortunate enough to be totally embraced by the Kansas City music community. It's great! We've made a lot of new friends. There is a lot of wonderful stuff here and a lot of resources that were actually not so available in a larger city like New York.

To what extent do you feel a kinship with other couple bands? We have several in St. Louis, including Sleepy Kitty and Bruiser Queen.

Turner: We love Sleepy Kitty! We are really inspired by their music and art. We met Evan online before we even moved to Kansas City, and he was so supportive and encouraging to us. It's great to have some pals in the midwest that are on a similar path that we're on, and we can bond over the Road Dawg Life.

Mason: It's fun to see how other people do it. I would say Sonic Youth and Yo La Tengo are two of my favorite bands, and they both had couples in them. I rewatched that documentary about Lemmy from Motorhead recently, and he spoke about how difficult it was to maintain relationships as a musician because you spend so much time on the road. He said something like the only way he thought someone could maintain a long-term relationship with a musician would be if they were both musicians. I pretty much agree with him.

Continue to the next page.

You've discussed in other interviews some of the difficulties between separating your musical and personal lives. As you continue with both, does it get easier or harder? What is the biggest blowout you've ever had before a show?

Mason: We've had some pretty big blowouts. There were times when we'd actually fight onstage. I'm kind of embarrassed about that now. We've started a new policy recently that we just don't do anything, bandwise, unless both of us are really enthusiastic about doing it. It's really simple, but it seems to be working. I think we both have a lot of respect for the work that we're doing now. It's like any job: If you are fighting with your coworker, then you're not going to do a very good job. It's funny how it can work both ways. Sometimes, our love for each other can get us through the shitty shows. And sometimes a good show will make Nan forget how annoying it is that she had to sit next to me in the car all day for six hours.

Turner: I recall more pre- or post-show blowouts than onstage blowouts, including one where I was locked in a backstage after a show in Hamburg. I have a history of getting locked in bathrooms and backstages, which results in a lot of panic and shouting. I think Matt is right, though, about us. Maybe it's age and experience, but we're definitely getting better at getting along.

Rumor has it that recent Schwervon! shows have included tap dancing. Do you expect that you'll amplify the tap-dancing as a percussive instrument, a la Tilly and the Wall?

Turner: It's sort of a performance-art break in our set where I "interpretive dance" while Matt reads a poem he makes up for each show. It's less a Tilly and the Wall thing, and more of a "what just happened?" thing.

Mason: I like to call it making the most of our assets.

You've played with both Belle & Sebastian and the Vaselines. What is your connection to Scotland, or is it just a coincidence?

Mason: We love Scotland. Oddly enough the Scottish connection for those gigs were a coincidence. But, aside from loving a lot of music from there, we do have a connection to Scotland and, even more specifically, Glasgow. Our first two records were released in the UK on a Scottish label called Shoeshine, run by Francis MacDonald. He is the drummer for Teenage Fanclub, and a very talented musician and songwriter in his own right.

As a two-piece, do you ever find it a challenge to fill out larger stages, rooms or festivals?

Mason: That's been a challenge that has sort of accidentally helped us develop our style, I guess. Sometimes those limitations free you up to explore other cool stuff you might not think about. Even though we don't have a bass player, I think a lot about bass. We didn't set out to start a band without a bass player. It just worked out that way. I feel like we're often finding ways either through dynamics or our arrangements to sort of fill in that space. People are often telling us after shows that they've never heard a two-piece generate so much sound. It's a nice feeling.

Mason: We have plans to go into the studio in May to test the waters on a handful of new songs. We didn't wanna rush these new songs, but we wanted to put something out because it's been a while. So we had this idea of recording some acoustic versions of some songs off of one of our lesser known albums, I Dream Of Teeth. We're gonna call it Broken Teeth. We'll probably just record them here ourselves, and then shooting for a new album in the spring of 2015.

Do you have any tips to staying sane on tour?

Both: Drink lots of water. Bring books. Eat something green every day. Don't drink too much. Get enough sleep. Take walks on your own when people drive you crazy. Listen to Marc Maron podcasts in the car. Try to work out as many details of the tour before the tour. Then you can relax more on tour.