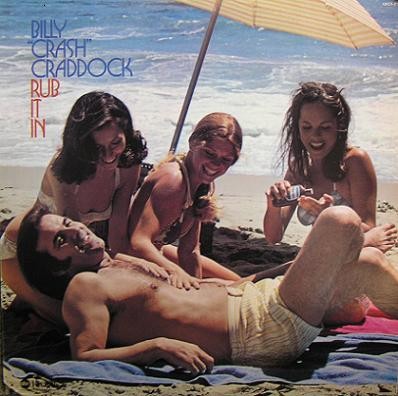 Album: Rub It In

What it sounds like: Chugging Wild Turkey at a roadhouse in Appalachia. Also, Hank Williams.

Best Track: “Farmer’s Daughter.” Like any good country song, this one tells a story. (Coincidentally, this story has served as a vessel for generations worth of dirty jokes.) It starts out with a nice, smooth walking western bass line and Crash singing: “My old car up and overheated…so I walked on down a country road,” then he comes to a house and the middle of nowhere and of course meets “a farmer’s daughter, she was a cool drink of water for a thirsty man.”

There’s no phone and it’s too late to walk anywhere else so the farmer says (via Crash singing), “My daugher here can show you to the barn if you don’t mind sleepin in the hay….hey, hey, hey!” We all know what happens next. With steel guitar, ho-down fiddles, and even congos (!) this is the complete honky-tonk arrangement.

Best Track, Part Two: “Arkansas Red.” The record includes an ode to a prostitute named Arkansas Red. Actual lyrics: “Arkansas Red, who’s sleeping in your bed tonight? Is it just another drifter like me?” and “A woman like you has got a love she can share with a whole lot of men.” With fiddles going crazy, I felt like I should have been drinking bourbon from a big jug while listening to this song.

Worst Track: “Rub It In” The song, in which Crash reveals his fetish for suntan lotion, is set to a jangling piano melody, screeching steel guitars, and whining fiddles. “I feel the tingle begin, you’re getting’ under my skin” he sings, as background singers The Nashville Edition chime in, “Rub it in, rub it in.” “Mmm…that feels good…put a little bit on my left shoulder, do it, put a little right bit…here. Do it” I felt like I needed to take a shower after listening to this song.

Who you can thank for the amazing cover art: Photography by Jim McCrary.

Interesting Facts: Via Wikipedia: Craddock was born and raised in Greensboro, North Carolina. He started out as a rockabilly singer with hit songs had titles like “Birdoggin’” and “I’m Tore Up.” Columbia Records signed him and he made some appearances on American Bandstand in 1958, but ultimately failed as an American teen idol. Bizarrely, he became enormously popular in Australia, notching five top 40 hits, including “One Last Kiss,” which was a number one for eight weeks.

He dropped off the face of the map in the mid-‘60s but reappeared in the early ‘70s with a cover of Tony Orlando and Dawn’s “Knock Three Times.” He was part of the era’s country rock renaissance that included Waylon Jennings and Willie Nelson. Craddock was, according to Wiki, “the sex symbol” of the group, with “a stage persona strongly influenced by Elvis.” “Rub It In” was his biggest hit during this period. The song has since seen a second life while serving as the melody for Glade air freshener’s “Plug it in” commercials. Seriously.