(Photos and words by Annie Zaleski; And my Flickr set.) 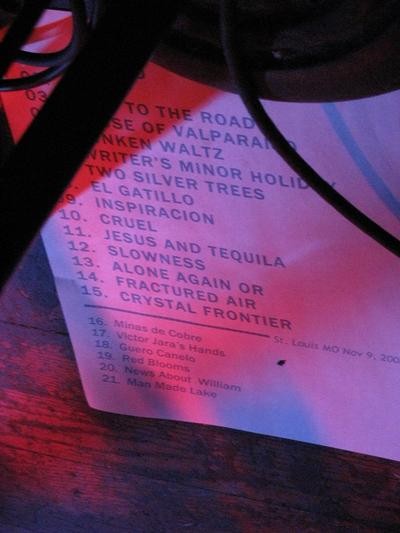 Calexico played at a very, very sold-out Duck Room last night. But the intimate setting was perfect for the group's intricate music, which is best described as mariachi-punk, sepia-toned indie-rock or desert twang. The ensemble's strength is sonic cohesion: Pedal steel, trumpet, upright bass, auxiliary percussion and even the occasional accordion (like on a fantastic version of "Sunken Waltz") interact seamlessly with traditional band instruments such as guitar and drums.

This year's Carried to Dust is no exception. Calexico never rocks in a traditional sense -- upbeat, brisk songs feel like a Cinco de Mayo celebrations -- but the new "Two Silver Trees" and its duststorm chords resembled Neil Young, and the sharp-elbowed horns on "El Gatillo" cut through the flamenco guitar. "Writer's Minor Holiday" captured the dense desolation of a solitary road trip, while the lovely, romantic "Slowness" (before which vocalist/guitarist Joey Burns encouraged couples to grab each other and dance) was only marred by shaky contributions from a local female vocalist.

Other highlights included the straightforward melancholy of Garden Ruin's "Cruel" and two of Calexico's most popular covers: the Minutemen's "Jesus and Tequila" and Love's "Alone Again Or." The latter especially is always a treat, especially because the group has inhabited the song and made it their own, thanks to killer trumpet contributions.

Vocalist/guitarist Burns was in a jubilant, talkative mood all night. Not only did he let Beatle Bob introduce the band, but later in the set he asked the bartender to create a unique drink for the night. The resulting libation, a mix of vodka, sour mix and called the "Scary Berry" (or something like that) earned the response, "Bartles & Jaymes has nothing on this!" The rest of his banter was equally lighthearted -- and entirely sincere. In fact, at one point he just looked out over the crowd and said, "It's really great to be here." From other acts, that might sound insincere; from Burns, it felt from the heart.

Openers the Acorn received a warm welcome from the crowd -- a well-deserved welcome, in fact. The Canadian quintet's Glory Hope Mountain is a pastoral triumph that never falls prey to the flimsy folk or watery hippie-rock of many newer bands. Hymn-like harmonies, chattering rhythms and rich acoustic textures mesh with Rolf Klausener's lead vocals, which are vulnerable but driven by deep inner strength. When he croons "I'm running as fast as these crooked legs take me" on "Crooked Legs," the emotional implications and nuances of that phrase explode.

Live, the songs from Glory were much more forceful and urgent, recalling the greats: Radiohead's wide-eyed rock days, U2's youthful optimism, Talking Heads' earthy mysticism. Despite the presence of two drummers, the band's rhythms and percussion didn't feel overdone or superfluous (as they do with many acts). Louder songs ("The Flood, Pt. 1," "Low Gravity," which resembles a brisk, busy jungle) and quieter moments ("Glory," a song, like the rest of the album, about Klausener's mother) felt equally monumental. Howie Tsui even played ukulele and guitar simulataneously on a few songs -- a juxtaposition of whimsy and tradition that suits the Acorn's music well. Besides that, it's obvious that the band plays live constantly; electric nuances and acoustic shapes boomeranged around one another with ease.

The band frequently commented about the enthusiastic crowd response, especially for a Sunday. Joanie's Pizza even received a shout-out; although this was the Acorn's first gig in St. Louis, it had randomly stopped there passing through and remembered its quality. Still, the band needed no hometown pandering to curry goodwill; its beautiful music was enough.