Opener So Many Dynamos and the “all ages” venue drew an especially young crowd to the Bluebird Thursday night. The former provided a gritty, noisy prologue to The Octopus Project’s cleaner, more modern set, which drew heavily from Hello Avalanche. 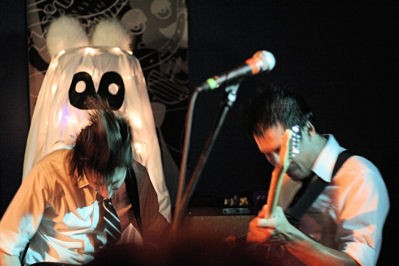 It’s no wonder that The Octopus Project likes to launch its sets with the idyllic “An Evening with Rtrhrtha.” The cheerful, almost orchestral rock song swells around a quietly persistent melody, played by the band’s audible feminine force Yvonne Lambert on a teeny tiny electric keyboard. It’s a song that holds your hand while it pulls you up, up and away (and eventually into the harder rock of “Tuxedo Hat,” just around the corner). 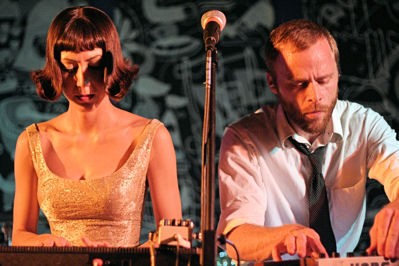 “Tuxedo Hat,” the only song besides “Music is Happiness” that Octopus played from One Hundred Ten Thousand Million, features the grainy, distorted guitar undercurrent more prevelant in the albums before Hello Avalanche, but buoyed by the same sparkling electronic melodies. And it’s usually Yvonne who provides these, dressing the part, as she did last night, with a sixties flip hairdo and a gold, strapless A-frame that rendered the white oxfords and dark ties of Josh Lambert, Toto Miranda, and Ryan Figg even more endearing; onstage, the four look like a homecoming diner date from the sixties.

The last half of the set, the dreamy Avalanche-heavy half that coincided with Yvonne on theremin, was Octopus at its unworldly, alien bicycle-riding best. I was curious about the combination of this crowd and the theremin, and it was fun watching the line of girls stage left, who were pretty obviously seeing someone play an instrument without actually touching it for the first time; “I Saw the Bright Shinies” and “Truck,” are consumingly novel musical microcosms.

After the show at the merch table, I asked Yvonne about the unusual balloon release that preceded/coincided with “An Evening with Rtrhrtha” at Lollapalooza. The balloons were untied, oblong oddities, and she said they got the idea from a similar balloon-release featured at a Japanese baseball game. 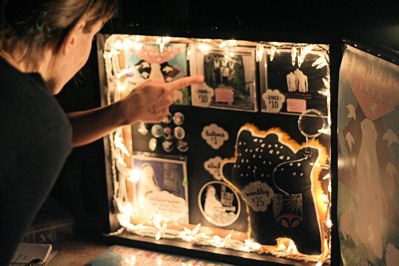 I found clips of one of those releases -- it captures how listening to The Octopus Project live makes you feel, as well as the more nebulous pre-election eagerness of our generation’s dizzyingly fast trajectory into the unknown. If The Octopus Project is the soundtrack to our future, I’m cheerfully boarding that mothership.

Below are videos from the show: "Black Blizzard Red Umbrella"

- Words and video by Kristy Wendt, photos by Vikram Singh