Show Review: Bun B and Orgone at the Old Rock House, Thursday December 18

Send a News Tip
Last night's show at the Old Rock House was packed wall-to-wall, proving that the elements are no match for the Lou's hardcore hip-hop heads. Despite the ice, rain and thunder, fans showed up in droves to support UGK's surviving member Bun B. Since the accidental death of his long-time partner Pimp C last year, Bun has released his second solo album II Trill, and there's a final UGK project reportedly in the works.

The warm-up talent was adequate, with Brooklyn's DJ Ayers on the tables and Atlanta's Freak Nasty as the host. Ayers played a good mix of hip-hop, soul and funk to get the crowd riled up, while corresponding videos played on screens throughout the venue. The set was not what I would've expected from a New York DJ though; his track selection seemed to favor southern rap (pandering?) and the whole thing just had a "digital" feel to it.


Freak Nasty was strictly the Master of Ceremonies for the evening, even though he's a multi-platinum-selling artist himself (you may remember 1997's "Da' Dip"). He was basically filling in time onstage with every old-school dance from the' Running Man' to the' Wop.' I thought it was funny, but not everybody was as amused by his antics as I was.

The tour's band, Orgone, killed it once again with their fusion of funk and soul. Their style lends itself particularly well to live hip-hop, and each time I see them perform I become fonder of their music. 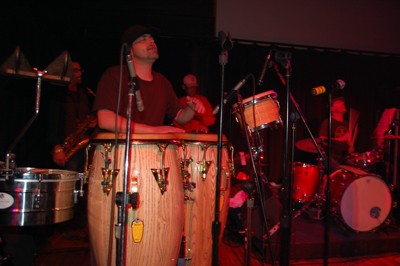 "If you ever see me play with a band it's gonna' be them," Bun commented, "they drink like fish and smoke like a forest fire!" Bun took the stage shortly after midnight, and instantly bonded with the crowd. The respect was mutual, as Bun performs in St. Louis on a regular basis, and the city supports him regularly in return. The Houston/Port Arthur impresario dug deep into his catalog of over 16 years, spitting his own verses as well as those of his fallen comrades. Classics like "Pocket Full of Stones," "Front, Back, and Side to Side," and "One Day" were crowd favorites, but his more recent songs like "Get Throwed" and "Everything I Need" got the audience equally as amped. He included a verse over M.I.A's "Paper Planes," and closed out with last year's hit "International Player's Anthem."

Hats off to Scion's Live Metro series, for putting on another outstanding (and free) event. Aside from the slight length of the headliner's performance (roughly an hour), this show was easily on par with acts charging $40 to $80 (or more) per ticket. For email notifications of their events, get on their mailing list at http://www.scion.com/livemetro.