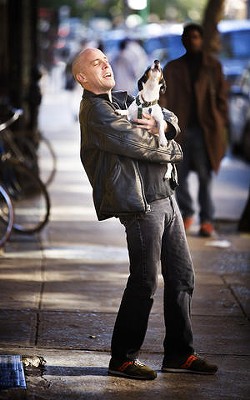 What becomes of the one-hit wonder? In the case of Freedy Johnston, whose 1994 song "Bad Reputation" was a bittersweet slice of acoustic alternative rock back when that was a viable genre, it appears that you simply keep writing good, catchy, heartfelt songs regardless of who is listening. At last night's show at Off Broadway, Johnston had the ears of about 60 or 70 patrons, but the sparse crowd was nonetheless captivated by his solo acoustic performance.

Johnston came armed with a satchel full of songs -- both his own and a handful of fun covers -- and proceeded to spend two hours spinning off tunes with a breezy nonchalance. He opened with "Neon Repairman," the sort of solitary, first-person character study that would appear throughout the set. (It's also an obvious cousin of Jimmy Webb's "Wichita Lineman," a standard that Johnston has covered in the past.) He moved into "Don't Fall in Love with a Lonely Girl" from this year's Rain on the City, and he demonstrated how sweet his tenor voice can be, especially when he moves into a higher octave.

Johnston has a lot of songs to choose from, but the bulk of last night's set seemed to revolve around those twin themes of love and loss...just like every other singer-songwriter since time immemorial. What sets Johnston apart from the pack is his refusal to fall into sad-sackitude or overuse vitriol. Love can leave you sad and lonely, but that doesn't mean that your songs have to be burdened with sorrow. A pair of songs illustrated Johnston's approach. Both "Evie's Tears" (from his breakthrough This Perfect World) and "Pretend It's Summer" retraced a lost summer's love with notes of wistfulness and twinges of regret, but there's a tenderness and understanding at each song's heart.

In keeping with the casual vibe of the concert, Johnston dusted off a few cover songs, each one in keeping with his own smart pop aesthetic. Matthew Sweet's "I've Been Waiting" fit perfectly amid his own songs, and a rollicking take on the Beatles' "A Hard Day's Night" brought the most energy of the night. He closed his first set with Wings' "Listen to What the Man Said," one of Paul McCartney's better silly love songs.

After a brief respite, Johnston returned for a slightly more focused second set. He turned his marquee song "Bad Reputation" into a kind of country shuffle, rushing through it slightly as if he's sung the song thousands of times before (and of course he has). Better was "This Perfect World" and a slinky, bluesy "Emily." He tossed in a few more covers (Joe Jackson's "Is She Really Going Out with Him" and "Elton John's "Rocket Man"), but the highlight was the new track "The Other Side of Love." It was another lesson in loneliness, but coming from Freedy Johnston, it sounded like a celebration.