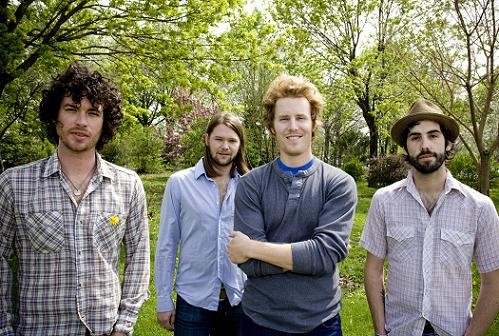 "This is how we know we're back in Missouri -- they don't do that shit out west. They don't stomp," Brian Roberts, lead singer of straight-out-of-the-Ozarks band Ha Ha Tonka, said last night as the crowd in cowboy boots and flip-flops alike dug their heels in to Off Broadway's wooden dance floor.

Ha Ha Tonka sounds like America Right Now. Listeners will draw references to current acts Kings of Leon and the Avett Brothers (who in turn reference the Band and the Allman Brothers). But this is the way of the modern Americana sound: messy and articulate at the same time, stealing liberally from traditional music and rock and roll and stirring it up in a big steaming stew. Add dashes of humor and discontent and you're there.

Ha Ha Tonka brings a dry heartland sensibility to its Southern rock/alt-country mix, a rich landscape with a complicated history of prejudice and hospitality. The band is named after a regional state park that contains caves and a ruined castle, and the music reverberates with the mythical quality of both those places -- as well as with the echoes of rural teenagers who no doubt gather there for backwoods ragers.

The first key to this sound is taking the traditions head-on, and being unafraid to make sudden left turns. The second song in the set, "Walking on the Devil's Backbone" (which is found on the band's June-released sophomore album, Novel Sounds of the Nouveau South), is a shuffling, wailing, roots-rocker. The quartet followed with Pentecostal daydream "The Outpouring," and its plaintive vocals and dulcet organ, showed there's no wussing out when this band fuses influences.

Halfway through, Ha Ha Tonka paused without warning for "Hangman," its a capella four-part harmonies chilling in the silence. Shortly after came set-highlight "Caney Mountain"; the song is a rolling Midwestern summer storm, breaking with the thunderclap refrain, "I shall see the buckle in the Bible belt."

Best of all, even though the underlying themes get heavy, Ha Ha Tonka doesn't take itself too seriously. (After all, its name is Ha Ha Tonka.). The band's choice of good-time covers underscored this: "Twelve-Inch, Three-Speed Oscillating Fan" by California honky-tonk band Red Meat, and the final encore, by popular demand, "Black Betty."

First opener Roman Candle were the charmers of the night. Skip Matheny, lead vocalist of the Nashville (by-way-of-Chapel Hill, North Carolina) indie-roots quintet, sounds like Loudon Wainwright meets Billy Corgan meets Barney Fife. The hooks are disarmingly lovely, and the talented band is full-sounding and assured. Though Roman Candle has been a band for ten years, Timshel Matheny-- keyboardist/organist and wife of Skip -- said they don't usually tour this part of the country. This time, however, the pair had their two toddlers in tow, as well as traveling grandparents to nanny during nightly shows. Please, Roman Candle, come back.

Mismatched emo-kid openers, Treaty of Paris, you can stay in 2005.

Ha Ha Tonka Setlist: 1. Gusto 2. Walking on the Devil's Backbone 3. The Outpouring 4. Word Climbing 5. St. Nick on the Fourth in a Fervor 6. Hangman 7. Pendergast Machine 8. Caney Mountain 9. Bully in the Pulpit 10. The Horse in Motion 11. Hold My Feet to the Fire 12. Close Every Valve to your Bleeding Heart 13. Twelve-Inch, Three-Speed, Oscillating Fan Encore: 1. Thoreau in the Woods 2. Black Betty

*Falling In was also played, after Caney Mountain and before Hold My Feet to the Fire