One can't help but chuckle when thinking about the irony of Helmet playing a venue called Rockstar Nightclub. This is not to say that there is really anything wrong with the venue, per se. It's just that Page Hamilton always embodied the archetype of anti-hero in the metal scene, while his no-nonsense approach to music has always been understated and tasteful but still face-melting.

Hamilton seemed in good spirits from the time that he and the latest incarnation of his band stepped on stage, smiling from ear to ear and greeting fans who were squashed like sardines at the front of the stage. Although some rock icons would cringe at the idea of spending so much time revisiting their band's back catalog, Hamilton seemed happy to give fans what they wanted even as he found creative ways to channel the past (the band played the entire second half of 1992's Meantime in reverse toward the beginning of its set). Hamilton cracked jokes with the crowd and took requests, tactfully playing off the fact that hit "In the Meantime" was requested by someone between every song.

In fact, the entire band seemed hell-bent on pleasing the crowd no matter what it took. Guitarist Dan Beeman, who's from Minnesota and started the night sporting a backwards Twins baseball cap, graciously entertained a fan's request for him to wear his Cardinals hat, much to the crowd's approval. But when Hamilton introduced bassist Jon Fuller (who's from Wisconsin) he couldn't help but making a jab about the (Milwaukee) Brewers' recent sweep of the Cards at home. A bold move considering the somewhat "aggro" nature of the crowd. (Did I mention that people apparently still mosh?) 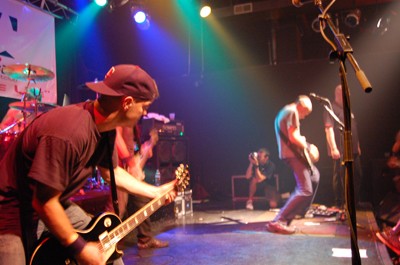 But this wasn't just a nostalgic comic relief set. Hamilton and co. blazed through airtight versions of songs from not only Meantime but also 1994's Betty and newer material from albums from earlier in this decade. The slow, sleazy trudge and thick-as-molasses guitar tone of "Give It" was a highlight; Hamilton's right arm seemed to slither over the fretboard effortlessly while laying down the drop-D riff-fest.

Saving the best for last, the band catapulted into a blistering version of "In the Meantime," whipping the crowd into its most frenzied state of the night and ending on a powerful note. But then the band members didn't leave the stage. For a good 30 to 45 minutes after the show, they stuck around greeting fans and signing autographs. One has to wonder whether every night is like this on Helmet's tour, but they all seemed truly happy to be out doing what they're doing -- and proved again that maybe bands did rock a little harder back in '92.