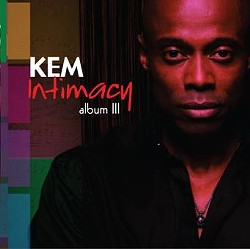 Fans of R&B and soul music filled the Fabulous Fox Theatre last night to take in the sounds of Kem's "Intimacy" tour, which is supporting the artist's chart-topping third album. The crowd was largely over 30, and dressed to a tee - to the extent that I almost questioned my decision to wear jeans to the event. The venue's sound system remained at a pleasant level throughout the show, making the immensely talented lineup that much more enjoyable to watch.

The show opened up with New Orleans-born soul-singer Ledisi, who immediately grabbed the crowd's attention with her jazzy, expressive vocals and her playful personality. The soulful chanteuse wasn't shy about mentioning her four Grammy nominations (she did on more than one occasion), but a paltry twenty-minute set was sufficient time to show that she'd come by them honestly.

Accompanied only by a single guitarist and a backup singer (who would occasionally play the shaker), the acoustic arrangement was ideal for Ledisi to show off her intoxicating voice on songs such as "In the Morning," "Going Through Changes" and a cover of Chaka Kahn's "Sweet Thing." Ledisi left quite an impression on the crowd, as they seemed reluctant to let her leave once her brief time onstage came to an end.

The follow-up act was Philadelphia's Musiq Soulchild, who replaced El DeBarge on the tour following the latter's decision to return to rehab. Musiq employed a much larger band than the opener; the lineup included drums, percussion, keyboards and a bass guitar with glowing strings. The R&B superstar began with "Buddy," followed by "Halfcrazy" and "Ifyouleave." The singer briefly disappeared backstage as the band played "Teachme," and returned to perform an extended, "freeform" version of the song, which ended up feeling a little like filler.

Musiq didn't miss a step before quickly rebounding with a show-stopping rendition of "Love," proceeded by "Sobeautiful," "Anything" (off his upcoming album) and "Girl Next Door." Given Musiq's lengthy career and high profile, his performance was relatively short - so favorites such as "Mary Go Round" and "Dontchange" didn't make the cut. Perhaps fans will have a chance to see him headlining a tour after MusiqandtheMagic is released this May.

For Kem's portion of the show, a video screen was added, along with more keyboards, more singers, a baby grand piano and a horn section. The Detroit native exuded "grown man swag" as he took the stage in dark-colored slacks and a button-down shirt with a fedora and opened his set with "You're on My Mind" from last year's Intimacy album. Kem added to the theme of intimacy by often taking a seat and prefacing his songs with a little background information. "I might be able to carry a tune, but songwriting is what I do," he explained before an emotional performance of "Love Never Fails." The cool-as-they-come crooner played piano on the ballad "Why Would You Stay," and had Ledisi join him for the duet "If It's Love." The set also included the hits "Back in My Life" and "Love Calls," among others.

Before closing out the show, Kem took time out to salute and give a cash reward to a young honor roll student he'd met with backstage. He also gave a little religious testimony, which the majority of the crowd was receptive to. His encore performance of the lesser-known tune "I Get Lifted," wasn't as strong as the rest of his set, but Kem easily abolished any doubt of his ability to headline a show.