The parking lot of Pop's Nighclub and Concert Venue in hardscrabble Sauget, Illinois is desolate. And that's putting it nicely. The gray spread of gravel seems like the setting for a midnight knifing. But the rough-and-tumble appearance (to be fair, the place has cops buzzing around the parking lot like they're slot cars) was righteous for Thursday night's show: Madball and M.O.D. were in town.

The building that houses Pop's -- a sprawling sheet-metal structure within sight of the Gateway Arch -- literally rumbles from the bass pumped out of speakers worthy of Spinal Tap.

On Thursday night, the venue that has a hair metal rep hosted hardcore acts that perfected their style in a much dingier -- although more famous venue -- CBGB on the Lower East Side of New York City.

NYC-proud Madball and New York City-born M.O.D. rounded out their Midwest tour in an appropriately hard locale. Opening up for the M's was Florida and New York's Shai Hulud.

The show felt like a trip down hardcore memory lane. Madball formed in 1988 as a side project for then New York Hardcore stalwarts Agnostic Front. Freddy Cricien, the elementary-school-aged brother of A-F's Roger Miret, sang in the band, named after the popular '80s toy. M.O.D. (Methods of Destruction) was started around '85, by Billy Milano, who formerly fronted Stormtroopers of Death (S.O.D.). Stay with me here. Shai Hulud started in the 1990s, and like most hardcore bands, broke up and got back together so much, their existence is almost fluid.

Shai Hulud (fun fact: Chad Gilbert from pop punk act New Found Glory formerly was in this heavy, metallic band) opened up to a sparse (headcount, including guest list: 79) crowd. The metallic five-piece played hits and old and new, chugging through all their distortion-heavy songs.

M.O.D. occupied the middle position, opening up with "Are You Hungry," a jam from 1987, when many of the crowd were in elementary school or diapers. The band, now based in Austin, Texas, is out touring for their final record -- Red, White and Screwed. Milano is known for being controversial, but also one helluva funny front man. Like most S.O.D. and M.O.D. gigs, the singer -- who turns 46 on June 5, he announced -- told stories for half the time and directed the beat-up-your-friends-and-stomp music the other half.

Madball closed out the show. A band that has only disappointed this reviewer when it gets off stage early (shows I have attended have included a fight with the sound guy at one and microphone problems at another), came out with middle-era hits early, then finished classics from the '90s and earlier. The first half of the set list went like this:

"For My Enemies" "We the People" "Can't Stop, Won't Stop" "Hold It Down" "Adapt and Overcome" "Get Out" (played twice because the crowd didn't move around enough. I counted about four people shouting "Get Out!") "Lockdown" "Nuestra Familia" "Infiltrate the System" "HeavenHell"

From there, the Madball went into older hits, including "Across Your Face," "Pride" and "My Life," among others. They finished with the seven-second masterpiece from the Demonstrating My Style LP, "Hardcore Still Lives." They did not play "Set It Off," the title track to their seminal 1994 LP. But with the way this band has toured in their second life as a group, I think my chances of hearing this song live again are better than good. 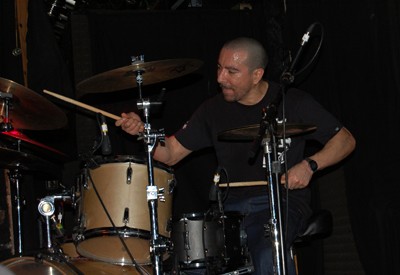 On drums for Madball on this tour is Mackie Jayson, former banger for the Bad Brains and the Cro-Mags. What a resume. The legendary drummer was off a few times during the set, causing a few false-starts. He pounded out the majority of the songs in sync with Madball, who on this last show of the tour, tightly cruised through their set.

To finish, let's get this out there: There were no fights and/or arrests. Nice! Madball shows in the past have had a very real element of fear. Sometimes it's an intangible, like, it's just in the air. Other times you could see it -- fights, weapons, people seriously inebriated. The off-stage actions of the band are the stuff of hardcore scene lore, but the show at Pop's lacked that aura. Maybe Madball has beat that off-stage rep and now fans can talk about their records and tours more? I doubt it.

This new era of Madball, after the band's "hiatus" in the late '90s, is a more fun band to see, though the dangerous element is still there, simmering below the surface. The enthusiastic -- if not overflowing -- audience seemed more focused on seeing this band one more time, than starting shit in the pit, as they say.