You have to feel for New Pornographers keyboardist/accordionist/vocalist Kathryn Calder. When she’s playing with the British Columbia, Canada, indie-pop trio Immaculate Machine, her clear, piercing vocals help earn the co-ed band accolades and acclaim. But when she’s touring with the Vancouver, Canada, power-indie-pop troupe New Pornographers, she’s the Skipper to Neko Case’s Barbie, the singer whose talents are too often overlooked if she’s sharing lead vocals with main songwriter A.C. Newman.

Calder had an especially tough task at the New Pornographers show Saturday night at the Pageant. Case had abruptly left the tour several days earlier due to a broken ankle, a sudden departure that bummed out many fans (especially since the show had been billed as the Neko-fortified lineup, the one many consider far superior). But Calder did a fantastic job filling her absence, matching lead vocalist Newman harmony-for-harmony on songs from the band’s latest album, Challengers (“All the Things that Go to Make Heaven and Earth,” “My Rights Versus Yours”) and Twin Cinema highlights (“Use It,” “The Jessica Numbers,” “Jackie Dressed in Cobras”).

Unfortunately, the other four New Pornographers – especially keyboardist/MacBook manipulator Blaine Thurier and guitarist Todd Fancey -- looked bored out of their minds. It’s a raging cliché to say that a band is going through the motions, but that’s exactly what transpired on stage. All barely moved or looking interested in what they were playing, even on catalog highlights such as “Mass Romantic” and “The Laws Have Changed.” Needless to say, the vast majority of the crowd was unengaged, whether it was due to the lackluster performance or simple disinterest.

To be fair, the sound mix at the show was terrible, at least in the middle of the venue. Near the front, things sounded fine, but in the back-middle of the floor near the bar you couldn’t hear the keyboards at all (which was problematic on a song such as “Mass Romantic,” where they’re prominent), nor many of the other guitar parts or the snare drum. (Other shows on this tour also appear to have experienced sound problems.)

The show did pick up near the end, starting when the band brought out native St. Louisian Eileen Gannon to play harp on Challengers’ lovely “Adventures in Solitude” – the band’s first time with a live harpist, Newman noted. (Gannon was reprising the part she performed on the studio version of the song.) Set-closing versions of the rollicking quirk-pop number “Sing Me Spanish Techno” and University of Phoenix ad jingle “The Bleeding Heart Show” capitalized on the energy created from this hometown buzz. The encore, which featured a cover of ELO’s “Don’t Bring Me Down” and “The Slow Descent into Alcoholism,” also connected (even if the band seemed like it couldn’t wait to get offstage after the latter ended).

(Photo of Will Sheff by Annie Zaleski)

Even better was when Will Sheff of openers Okkervil River came out to add theatrical howls and goofy accompaniment to the Dan Bejar-penned “Myriad Harbour.” In fact, his brief presence underscored what the New Pornographers really miss when Case isn’t with them: a strong, vibrant personality to bring together the rest of the band. Chemistry in any situation – whether it involves sports, bands, relationships or otherwise – is a fickle, intangible thing that can change suddenly and subtly. Newman and Calder are fantastic musicians, but appear to need a dynamic third person to enhance their strengths.

Okkervil River also faced many of the same sound problems as the New Pornographers, where the vocals dominated above guitars and other instruments. This was a disappointment, because Charles Bissell of the Wrens, another thoughtful indie-pop band (see a trend?) was playing guitar as part of the touring band. But Okkervil River more than triumphed over any technical snafus with an hour-long set that felt entirely too short.

Credit the fantastic, tight backing band – all of whom, save for one, sported suits -- behind lead singer/founder Sheff. Although Okkervil’s albums (such as 2005’s Black Sheep Boy) tend to be sparser affairs, Sheff’s grain-fed indie-folk blossomed with the rich accompaniment. Highlights from last year's Stage Names, including “Our Life is Not a Movie or Maybe)” and "John Allyn Smith Sails" (which segues into the Beach Boys-popularized “Sloop John B”) were fantastic, as was a harrowing “Westfall,” whose repeating cries of “Evil don’t look like anything” – played in start-stop style in unison by the band – chilled.

Sheff’s melodramatic posturing (and sometimes-precious lyrical rhymes) was a bit much in spots; he conjured the tortured mewling of Dashboard Confessional quite a bit, bizarrely enough. (Perhaps this explains how Okkervil has apparently become the band of choice for thoughtful, literate young’uns.) But this emotion didn’t seem contrived or superfluous, and in the end the Austin band completely stole the show.

More photos, all by Annie Zaleski except where noted: 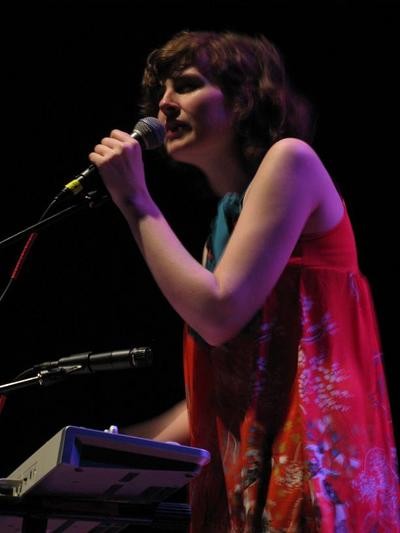