Show Review: Panic at the Disco at the Pageant, Friday, May 30

Hordes of teenage girls -- okay, that’s unfair, fans of all ages, but mostly teenage girls turned out for the Phantom Planet, The Hush Sound, Motion City Soundtrack, and Panic at the Disco at the Pageant Friday night. 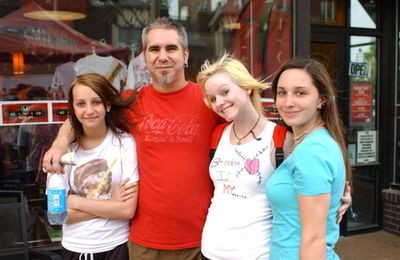 I missed the first two openers, but was just in time for Motion City Soundtrack.

This set was an unexpected gem, full of catchy, synth-heavy pop-punk, played to a very appreciative and very enthusiastic audience. The crowd chanted along, stomped their feet, threw the horns, and danced wildly -- causing front man Justin Pierre to concernedly explain to the crowd, “There is a way to rock,” as he demonstrated the very traditional pogo and the band launched into “Let’s Get Fucked Up and Die.”

They closed their set with the crowd favorite “The Future Freaks Me Out” but only sang half of the song themselves—the rest was chanted by the delighted crowd, who yelled out “I’m on fire and now I think I’m read to bust a move!” for all they were worth.

Between sets, a screen behind the stage played “Panic TV,” which showed Honda Civic commercials, a scrolling bar of text messages the audience sent in to a special number (they proclaimed things like, “scream if you love panic!” and “I LUV SPENCER SMITH” and “Thnks fr the tix dad!!1!”), and some truly excellent music videos—including Doug’s jazzy cover of “Dance, Dance” by Fall Out Boy, and “Everything We Had” by The Academy Is…. 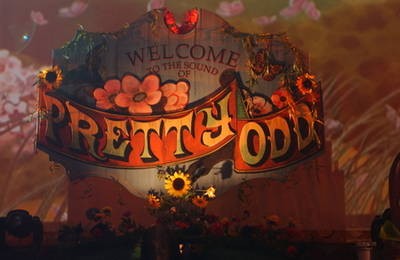 And then the main event: Panic at the Disco.

The origin of this quartet is practically a fairy tale. Two childhood friends in Las Vegas bum around playing blink-182 covers, and as they get older, they take their band more and more seriously, and record some demos that they upload to an internet music site. Ryan Ross, the band’s songwriter and guitarist, emailed Pete Wentz of Fall Out Boy inviting him to listen to the songs. Wentz did, then flew to Las Vegas to see the band play, and immediately signed them to his label DecayDance. (An Instant Message conversation between Ross and Wentz that floats around the internet, supposedly leaked by former bassist Brent Wilson’s brother, has Wentz asking the important question: “The chicks gonna be swooning?”) These teenagers started their first tour at third billing, were at second by the end of it, and headlined through Europe -- all before their first album, A Fever You Can’t Sweat Out was a year old.

Now with their sophomore effort, Pretty. Odd., they are all finally legally allowed into the clubs they play. (Rumor has it that neither drummer Spencer Smith, nor lead singer Brendon Urie, were allowed into Ross’s 21st birthday party, held at the Wentz-owned New York City venue Angels & Kings, which is 21-plus.)

Unlike their heavier, more “emo” first album, Pretty. Odd. isn’t dark, baroque, or opaque, and there are no references to cabarets. It also avoids second album syndrome: There are no songs about how tough it is to be famous, no songs about the downsides of touring, no whining. (Ross explained to KERRANG!: “I know that a lot of bands come out on their second record and it's all about how bad being famous is… Well, boo-hoo. For the most part those records are bullshit.”)

Pretty. Odd. is a delightfully over-the-top pop album, a Beach Boys and Beatles-influenced frolic, full of horns and harmonicas, clarinets and mandolins, and lyrics about “marching clocks” and new beginnings. “Things have changed for me, and that’s okay,” sings Urie in “That Green Gentlemen.”

The Pretty. Odd. Honda Civic tour is also markedly different from Panic’s other tours, which featured contortionists and dancers on stage with the band -- who were then dressed in faux-Victorian circus costumes, bedecked with roses, and bedazzled with MAC eyeliner -- as well as a scripted stage show between band members themselves. This tour has flowers draped over microphone stands, Ross’s famous flowered shirt collection, bubbles sprayed over the crowd, and Chicagoan bassist Jon Walker with bare feet.

It was delightful to see the guys on stage having as much fun as the crowd. Drummer Spencer Smith banged his tambourine with gusto, while Urie wore his on his head as a crown. During ballad “Behind the Sea” (“This song is about swimming,” said Ross with a cheeky grin), the crowd was asked to wave their arms over their heads: “Make it look like the ocean, everyone!” Meanwhile, Walker invited everyone to his house at midnight for a pool party, and Urie explained why he could not take one audience member up on her proposal of marriage: “I’m not ready for commitment!” Jazz hands! A top hat! A call by Ross to see “cell phones, lighters, any kind of light you can make, because this song is made for light” came before the lament “Northern Downpour,” while there was an exhortation from Urie -- “I wanna see you all giving each other hugs and kisses!” -- before “Mad as Rabbits.”

The majority of the set was, of course, songs from Odd., but the band played several tunes from the first album. Rather than try to mimic their old style and sound, though, Panic stripped down these songs. The highlight of the older stuff was a new version of “I Constantly Thank God For Esteban,” which was much slower, with a heavier bass line, and featured less accompaniment to Urie’s vocals altogether.

They closed the show with a rousing chorus of “Hey, hey, hey, goodbye” and while some of the crowd was screaming their love for Spencer Smith, most of us were really appreciating the fact that these kids can harmonize and grin at each other at the same time.

“That Green Gentleman”—Panic at the Disco