When your hearing is still messed up 36 hours after a show, it had to be good. The hearing aids we'll need in 40 years will be well worth it. It was loud, it was visually and aurally arresting -- and it was awesome.

The ever-reliable Art Majors delivered a solid opening set, though in retrospect their swell-dependent, crescendoing song structures and audible/sensical lyrics seemed ill-suited to the maelstrom compositions of Indian Jewelry and Holy Fuck. Still, their high-octane performance was definitely on par with the out of towners.

Houston's Indian Jewelry is known for its rapture-inducing shows, due in part to the chaotic nature of the arrangements, but mostly because they always drop the house lights and play with a strobe light throbbing onstage. On Friday, the band sounded a little more crunk than expected, like Salem on psychedelics instead of crack, or Cold Cave on syrup and Suicide binge*. IJ boomed in bottom-heavy, with principals Erika Thrasher and Tex Kerschen taking turns on vocals and Thrasher occasionally trading place with Mary Sharpe on the floor toms. Thrasher and Kerschen also swapped guitar and took turns programming the shattered electronic squalls. Richard Durham's bass was fried and forceful beneath the metallic crush of electronics. "Look Alive" was perfect intro to their dankwave sound, a heady mix of tribal drums salvos, psych rhythms and Kerschen's tense delivery. It was the band's first show at a venue other than Lemp Neighborhood Arts Center, and Kerschen advised the crowd that Lemp is a "fantastic venue. I recommend you look into it."

At first the strobe light was abrasive, but as the set sped along, it actually sharpened the sound and brought a level of introspection that I've only experienced once before, at the Sunn O))) performance at the Firebird in '09. It's amazing what extreme visual disorientation can do to the way your brain interprets sound--almost as if trying to compensate by correcting the jarring bass delay, so it all came in high definition drone. The strobes were visually stultifying, but it worked, casting the band's movements in unreal echo that was comfortably reliable in the psychotropic drone*. Thrasher's vocals were drenched in effects but her soulful voice was soothing amid the alien twerks and erratic, broke-ass drum machines on "Excessive Moonlight," and the synth drone of "Temporary Famine Ship."

As the strobe shock wore off, the air was still buzzing from Indian Jewelry's emotive performance, and the crowd was primed for Holy Fuck's schizophrenic noise-making. Core members Brian Borcherdt and Graham Walsh faced off front and center in a benevolent effects duel at their respective gadget tables. Borchedt had a vintage film splicer that simulated a record scratch when he yanked or coaxed the film out of its maw. 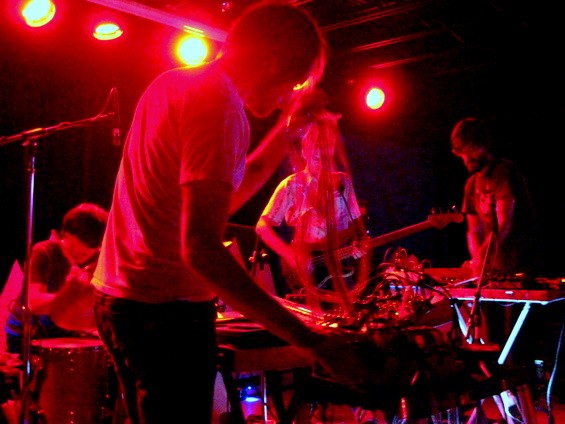 Though I didn't lay eyes on it myself, I believe there was a V-Tech children's learning pad among Walsh's bevy of instruments and teeny keyboards. They played all but two tracks from their third album, the Polaris Prize nominated Latin, released earlier this year on Young Turks. A few of the old favorites came out to play, but "Tone Bank Jungle" and "Milkshake" were sadly absent from the set.

Holy Fuck deserves mad props for maintaining its electronic integrity. They don't rely on programmed loops or laptops to shape their sound, everything is done live which is all the more impressive. Walsh and Borchedt were in constant motion, switching keyboards mid-song, jamming buttons and twisting knobs with rapidfire precision. The electronic manipulation is the muscle of their music, elevating the rhythm section's ambient funk grooves. "New Song" was an industrial-flecked heavy metal hymn, saturated with pummeling rhythms courtesy of Matt McQuaid on bass and Matt Schulz on drums. "Stay Lit" was the only low-key track, highlighted with glassy Technicolor tones and supernal "ooh"'s. Borcherdt and Walsh's heavily distorted chirks and yells rhythm section did justice to the gleaming "Stilettos," one of the standouts of the night.

After a quick minute, the band returned for an encore and Borcherdt joked that it was "kind of a Canada thing" to close with Rush's "Tom Sawyer." "Every time I hear Rush in the States I think it's some cruel joke. You shouldn't have to tolerate that."

Critic's Notebook: *The drug references are unfortunate but necessary.

I may or may not have permanent hearing loss from the show.

One bummer about Indian Jewelry's set (and Holy Fuck's for that matter) was that the residual ambient noise in the place made it sound like no one was clapping, though they most assuredly were.

If there isn't a Holy Fuck/Fuck Buttons split in our future, someone should get on that. Fuck Button's "Olympians," off their 2010 LP Tarot Sport is a natural extension of, and possibly informed by, the cloud-skimming epic trill of "Lovely Allen." Borchedt and Walsh were grinning and bouncing during "Lovely Allen," as if wordlessly agreeing that yeah, this song fucking rules.

Due to a camera malfunction, none of my pictures of Art Majors or Indian Jewelry turned out, but check Firebird's house photog Bryan Sutter's Flickr for some excellent snaps.