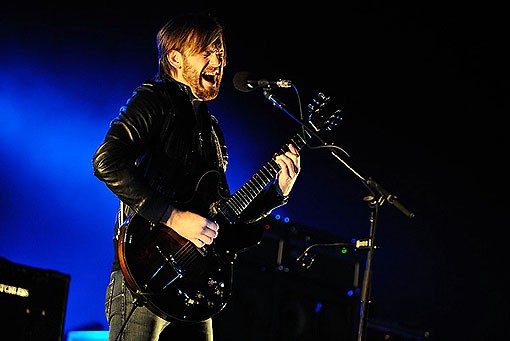 "I feel like a f*-ing king," Caleb Followill emoted to the jacked-up crowd two-thirds of the way through last night's Kings of Leon show at the Scottrade Center. The crowd offered a crown of fist-pumps.

Kings of the world? Getting close. The band, with the 2008 release of its fourth album, Only by the Night, is grasping in the U.S. the kind of mega-stardom it has enjoyed in the U.K. since its 2003 debut. Three Grammy nominations, one win; features in nearly every issue of Rolling Stone; the move from halls to stadiums. Much is made of America's slow-coming embrace, and its rapidly rising fervor for the good-looking Followills, who can growl or soar like the biggest bands in history.

See a photo slideshow of the band's concert last night.

KOL has reached a unique moment in its ascension: steadily climbing in mainstream consciousness, beloved by fans new, old and "original," fed grapes by critics, maintaining its edge as rock revivalists-- with no fixed pinnacle or drop-off in sight. Going in, I wondered if this was a high-altitude point for KOL: Could they get so light-headed in the thin arena air that they forget how they got there? Does having your single played on Z107 (as "Use Somebody" is) really steal pieces of your rocking soul?

When the lower half of Scottrade was more than half empty at 8 p.m., it looked like they might have overestimated their Wednesday night market here, with tickets for $43.50. While the appreciative general admission crowd smashed in and got cozy, the seated sat through White Lies, the four-piece British opener. The black-clad lads (except for white-shirted drummer - symbolism?) channeled '80s post-punk, sometimes by way of the Killers' Day & Age: dark boom drums, synths sliding through empty space, lead singer Harry McVeigh's deep and solemn Ian Curtis impression, and surprisingly danceable riffs.

All ages streamed in as the time closed in on 9:15. Delays in entry might have been due to venue unpreparedness, however -- I heard of lo-o-ong gen ad lines, and a security guard told me they had expected 6,000 to 7,000 concertgoers, and probably 10,000 showed up. Although tardiness might also have had to do with level of interest: My section filled up with middle-aged parties who rolled in as the lights went down and scooted out before the last encore.

The entire crowd was on its feet as the Kings took the stage and without a word launched into the sinister fuzz and classic rock guitar riff of "Crawl," bobbing and cheering as lead singer Caleb hammed, grinding into the base of his guitar. So this is what Kings in concert sounds like: rumbling and tightly exuberant as their records, the arena's lights and vast space attributing every song with Only by the Night's expansiveness. Following with "Charmer," off 2007's Because of the Times, Caleb exercised his enigmatic vocals with spooky and wonderful shrieks and ODB-style slurrings of "She's always lookin at me," which hopefully came as a welcome surprise to those who had only heard their latest album. Little brother Jared postured with the bass, and eldest Nathan blew bubblegum behind the kit, laying down a nasty undercurrent reminiscent of Pixies and Blur.

Though half of the 22-song set was from Night, KOL did do a fantastic four-song series of older songs right off the bat that began with "King of the Rodeo" and ended with "Fans," sandwiching two of the most raucous tracks: "Taper Jean Girl" and "Molly's Chambers," which show the Kings at some of their shaking, barely-intelligible, down-and-dirty best. Though the Night tracks got the loudest crowd recognition and singalongs, it was good that KOL hasn't turned their back on their excellent repertoire, considering it fits well with their most recent output.

The Kings kept up the energy, moving swiftly between songs that packed audio wallops. As for the other component of performance -- the part where the band is actually standing and playing in front of us-- they seemed to be trying on arena-size moves from the rock star handbook. From the shaking video close-ups of lead guitarist Matthew Followill's solos to the flashing lights that seemed choreographed to Caleb hitting his knees to shred, sometimes I felt like I had been virtually transported to "Guitar Hero World Tour: The Southern Strokes!" Caleb's stilted banter didn't alleviate that feeling ("What a dream...helluva year...You guys are the ones who made us who we are"); he seemed most honest when inviting the crowd to sing along to "Sex on Fire": "This song was meant to me messed up."

Then again, the Kings' words have never mattered so much to me: I love when the parts are all moving in tandem, building to the edge of disaster, the reverb swallows you, and Caleb wails like a bad man crying. I got that last night, and the strength of these songs is their delivery by this band (can you imagine a cover of "Sex on Fire"?) -- hether it be the tinny sly backbeat of "I Want You" or dark Band vision of regular set closer "Trani." For me, the encore was the highlight of the show, as the Kings dug into creepy "Closer" and seven-minute thumping runaway tale "Knocked Up," and the crowd had an ecstatic fit during the big-as-U2 chorus of "Use Somebody."

While I contend that the purpose of the encore is the sweetness of those last 15 minutes of sleep after you hit Snooze, after the show I heard one show-goer complain, "Why make us wait eight minutes before you come back out? Who do you think you are-- U2?"

Not yet, thank the Lord, not yet.