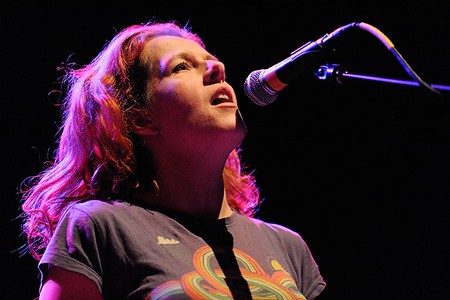 Neko Case's show last night at the Pageant wasn't that different from her September 2008 appearance at the same venue. However, the comfortably crowded show was, shall we say, loose. Not musically - oh no, Case throws her head back, shakes her tomato-red mane and out pours her sweet, unadulterated voice, like clockwork. And her backing band - which includes long-time vocal foil Kelly Hogan and pedal-steel wizard Jon Rauhouse - helps her gently replicate the studio versions of her songs.

But Case was clearly in a goofy mood, from the second she stepped onstage, wearing simple blue jeans and a T-shirt. The show began with the big reveal that she and the band were comparing bad song lyrics before the show started. The winner? According to Case, it's the line, "I feel the horses coming gallopng," from Hole's "Malibu" - which she shared via a bellowed Courtney Love imitation.

Inexplicably, banter throughout the set turned to Slayer, and Case musing that "Tom Araya probably got the most pussy in metal." References to all forms of metal became a recurring - and increasingly ridiculous -- theme as the 90-minute set wore on. The introduction to "Prison Girls" was: "This song could be a Slayer song. Or our Celtic Frost. Those guys are too serious to get laid," and devolved into musing about Cannibal Corpse ordering English breakfast after a recent tour date. Case revealed she likes KISS and Iron Maiden and at some point blurted out, "It's fucking embarrassing to be Megadeth."

By the encore, Case and Hogan were slap-happy and cracking each other up so much, they could barely start "Vengeance Is Sleeping." The culprit? Case's offhand crack about her wardrobe tonight chosen between "camel toe or moose knuckle." As she doubled over laughing, she gasped to Hogan, "Why do you think I keep pulling up my pants?" - referring to a gesture she repeated throughout the set.

Now, for most artists, such stand-up comedy would be a distraction. But inexplicably, this just made the show more appealing and charming. In fact, a Case concert would be a somber, macabre experience without such levity - her songs are often about desperate loneliness, naked violence and feral animals. (Only sometimes do they dip their toes into sweetheart-country love or happiness.) But the disconnect between her casual stage banter and the serious subject matter didn't diminish the emotional suckerpunch of her music. 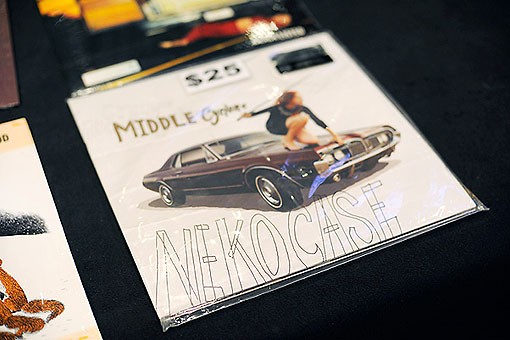 "Middle Cyclone," burnished by acoustic guitar and percussion shakers, was lovely and sparse, as was the jaunty new twang-rocker "This Tornado Loves You." The chestnut "Deep Red Bells" cut to the quick, thanks to Case's otherwordly emoting - on this song in particular, her voice seems drawn from a faraway place of deep melancholy - while opener "Things That Scare Me" featured goosebump-inducing harmonies between Case and Hogan. The desert rocker "Hold On, Hold On" and a sturdier version of "That Teenage Feeling" (both taken from 2006's Fox Confessor Brings the Flood) also stood out.

Case's newest album, Middle Cyclone, was well-represented, in all of its nuanced, alt-roots glory. But calling Case a country artist - or some permutation thereof - just isn't quite correct; her originals are like standards, they're so timeless and haunting. Even as upright bass, subtle drumming and rustic guitar matched her own electric or acoustic strums, Case transcended genres and eras as a bewitching, calming presence. As if to cement this fact, the encore-ending "Train From Kansas City" - a Shangri-Las cover Case has made her own - put a smart exclamation point on the night. Or as Hogan put it: "Thanks for making Thursday so bosomy." 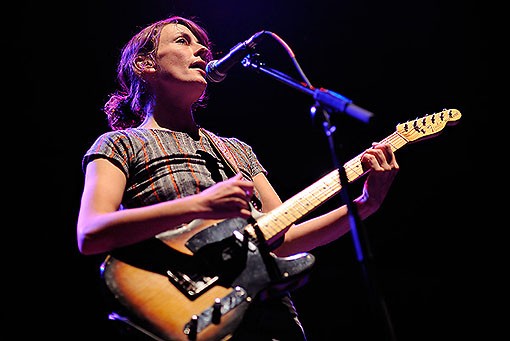 Canadian singer-songwriter Sarah Harmer opened the show with a fantastic, stripped-back set of songs. Using just a guitar - a simple accompaniment which matched her casual, ponytail-and-jeans attire - Harmer introduced new songs and dusted off old favorites for an attentive crowd. Her songwriting focuses on the minute details which add emotional richness to life, and on this night, these tales matched the sweet melancholy wafting through the crisp autumn air. The appreciative audience hung on her every note, and even called out a request for the 2000 single "Basement Apartment," which Harmer obliged.

Critic's Notebook: Special notice must be given to the projections/videos which played behind the stage during every song - on a screen held by a giant owl with glowing yellow eyes. The quiet, melancholy videos - everything from a tornado with cartoon hearts on it to deserted roads at dust - matched the timbre of the songs.

Setlist: "Things That Scare Me" "Maybe Sparrow" "People Got a Lotta Nerve" "I Wish I Was the Moon" "Hold On, Hold On" "I'm An Animal" "Middle Cyclone" "The Pharaohs" "Polar Nettles" "Deep Red Bells" "A Widow's Toast" "Margaret Vs. Pauline" "Prison Girls" "The Tigers Have Spoken" "Fever" w/Sarah Harmer on vocals "Red Tide" "Alimony" (Harry Nilsson cover) "That Teenage Feeling" "This Tornado Loves You"