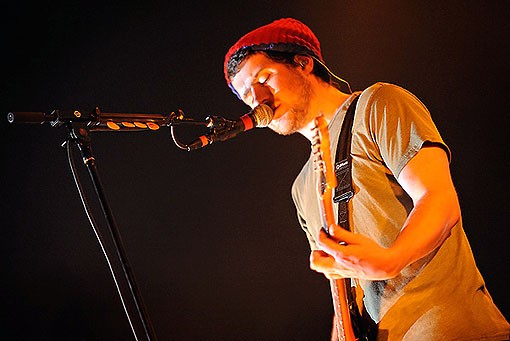 Brand New means business during its shows. The goal of its live experience is to exorcise demons, to provoke thought and, above all, produce catharsis. Looking for a night of frivolous entertainment? Go see another show instead. These Long Islanders are kicking out the post-hardcore, post-grunge, post-goth jams - angst and aggression firmly at Def Con One.

This emphasis on weightier matters was obvious during Brand New's sold out Pageant show. The quintet spent much of the night bathed in dim light; only occasionally did a harsh spotlight and smattering of yellow lights bloom - or an abstract video appear -- to create dancing shadows or visual stimulation.

The band's casual apparel (vocalist Jesse Lacey sported a red winter hat, which he turned inside out halfway through the set, and guitarist Vinny Accardi and bassist Garrett Tierney donned outdoorsy wear) didn't undermine the serious nature, however. Although Lacey stayed relatively in one place, his band mates thrashed around onstage with as much fervor and passion as Brand New's fans. 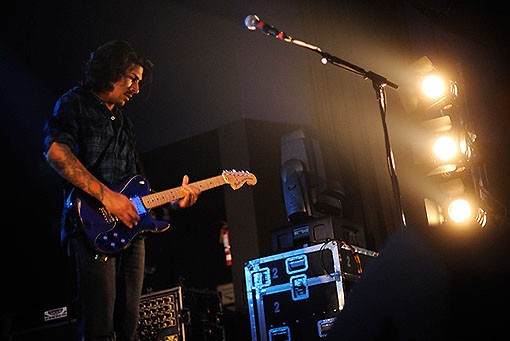 Still, at times, the density of the music brought on unwelcome emotional overload, as monolithic slabs of guitar, towering waves of distortion and clockwork drumming swirled together. Touchstones included Nirvana's bubblegum grunge-punk, the Cure's manicured gloom clouds, Cursive's gnarled arrangements and Modest Mouse's creepy desert-twang. Separately, Brand New's songs are self-contained nuggets of philosophical introspection - but when strung together for a 90-plus minutes set, they can form an exhausting trek through the band's collective psyche.

Better was Brand New's use of dynamics -- songs crashed from whispering silence to ear-blasting noise (seriously, this is one of the louder shows I've attended in recent memory) to great effect. "Luca" - from 2006's The Devil and God are Raging Inside Me - started off boring and slow, but positively exploded when vocalist Jesse Lacey strapped on an electric guitar to punctuate the ending.

The set's major problem was the pacing of these ebbs and flows - which is more of a function of how early it is in the tour (St. Louis was the fifth date) and the band's career trajectory. In just eight years, Brand New has evolved from a troupe of clever pop-punks into a noisy, abstract behemoth. It's a progression that's actually more organic and logical than the set order betrayed.

Although huge sing-alongs welcomed the more accessible moments of the set (a poppy "Archers," and the wiry, post-screamo favorites "Jaws Theme Swimming" and "Sic Transit Gloria...Glory Fades"), they stood in stark contrast to later, more complex material. And just as soon as Brand New gained momentum from Lacey's hawk-eating-prey scream - which his band mates matched with some tight, flash-heat hardcore-punk textures on a few songs - they lost steam with Daisy's "In a Jar" (whose stacked harmonies resembled Alice in Chains -- seriously) and the meandering post-rock tune "You Stole."

But Brand New found its groove as the main set came to a close: With two drummers doubling its rhythmic force, "Sink" assumed a distinct Southern boogie, while subsequent tune "At the Bottom" sounded like a grungier Kings of Leon, thanks to a piano-based twang.

The latter songs dovetailed nicely with Manchester Orchestra's fantastic opening set. It's hard to believe that the Atlanta, Georgia, band played Off Broadway a few short years ago - mainly because the act's sonics easily filled the cavernous venue. The first two songs of the set, in fact - "Pride" and "Shake It Out," both from this year's Mean Everything to Nothing -- inspired goosebumps, thanks to their dust-storm walls of noise and vocalist Andy Hull's throat-searing yells.

But Manchester Orchestra is a hard band to pigeonhole. Although inspired by many of Brand New's influences (i.e., Modest Mouse's indie acuity and Nirvana's grunge howls), it also incorporates nods to Built to Spill's guitar jams, the noisy twang of My Morning Jacket and distortion-loving Georgians such as Dead Confederate. But at its core, MO is a soulful Southern-rock band, with all the heart and soul that comes with the tag. Hit "I've Got Friends" was slower and featured piano more prominently, while audience favorite "My Friend Marcus" also featured burbling keyboards.

Keyboardist/percussionist Chris Freeman deserves a special mention - he was clearly into the music, and was often found headbanging and otherwise throwing around his body in a violent, spasmodic fashion. The crowd responded to this enthusiasm: An audience sing-along to "Now That You're Home" drowned out the band, and a woman shouted "I love you!" during "The River"

Manchester Orchestra setlist: "Pride" "Shake It Out" "Now That You're Home" "My Friend Marcus" "I've Got Friends" "Everything to Nothing" "The River" "The Only One"