Photo: Egan O'Keefe
St. Vincent last night at the Firebird. See more photos from last night's show.
A few songs into her hour-plus set, St. Vincent's Annie Clark told the crowd that she was "flummoxed by your enthusiasm." For once, it didn't seem like an instance of rock-star faux-modesty -- her wide-eyed visage seemed to be taking in the nearly full house at the Firebird with equal parts grace and disbelief. But it was hard to be anything less than enthused with her performance, her first headlining appearance in St. Louis and her first trip since she's become a darling of the art rock and indie pop worlds.

For those of us who caught Clark's one-woman opening set for John Vanderslice at the Billiken Club in May of 2007, it was a communal realization that good, bold things were to come for St. Vincent. This year's Actor and last night's show were proof that, if anything, our expectations were too low. Clark and her four-piece band burned through a set that ping-ponged between delicate chamber-pop orchestration and ear-ringing distortion. Clark proved a gentle mistress on stage, surrendering to the noise-bursts and flute-and-violin reveries but never surrendering control, even when chaos threatened to swallow the stage whole.

Photo: Egan O'Keefe
St. Vincent last night at the Firebird. See more photos from last night's show.
Joined by a drummer and three multi-instrumentalists (who traded guitar, violin, keyboard, bass and woodwinds), Clark opened the show with "Marry Me," the title track to her debut album. The soft washes of sound that encased the song's intro burned away with Clark's jazzy, staccato guitar plucks and her double-edged proposal: "Marry me, John, I'll be so good to you / You won't realize I'm gone." It was a winning move, but the song's delicate nature gave way to the more sinister, beguiling "The Strangers." Borrowing the melody (and therefore the melancholy) from "Bye Bye Blackbird," the song found Clark singing cutting couplets to a lousy lover over hypnotic Mellotron flutes and gentle violin before a nail-bomb of fuzz and fury brings the tension to a head. This see-saw arrangement provided the template for most of the night's songs, but the effect never dulled.

Clark stuck mostly to songs from Actor, and the dense, florid arrangements on record translated beautifully in concert (special props to the drummer, who approximated the album's decaying drum machine beats with pin-point accuracy). Surprisingly, Clark rarely looped her own vocals ("Save Me From What I Want" being an exception) and let her backing band fill in on harmonies and backing vocals.

As a singer, though, she rarely needs the help. Her voice was always clear and strong -- Clark is a singer less concerned with conveying emotion than setting moods and telling stories with impressionistic details (a trait that makes Actor so aptly named). But when she performed solo, her voice took on a fragility that was sometimes lost amid the din. Six songs in, her band mates left the stage and Clark pulled out the Beatles' "Dig a Pony," a Let It Be track that she absolutely nailed. It turns out she's a pretty great blues guitarist too, bending the notes in perfect harmony with her voice on the chorus' come-down -- for that moment, she was Lennon and McCartney all at once.

As befits an artist who so carefully constructs her songs, there wasn't a bum note in the show last night, from the TV on the Radio-like saxophone skronk of "Marrow" to the focused solo performance of "Paris is Burning" that opened the encore. The night ended with "Your Lips are Red" (from Marry Me), a culmination of the night's push-pull with noise and destruction. An unsettling rhythm and shuffling, two-note guitar pattern defied time signatures; as was the case throughout the whole set, Clark fought the things-fall-apart rule of entropy and ended the song on a cushion of violin and ambient noise. 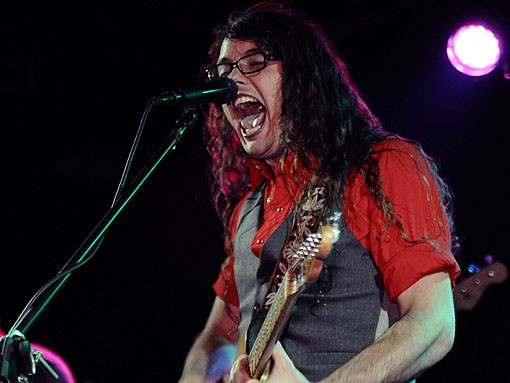 Photo: Egan O'Keefe
Elsinore last night at the Firebird. See more photos from last night's show.
Champaign, Illinois' Elsinore opened the show with a pretty flawless set of power-pop and space-rock. Singer Ryan Groff has a faultless falsetto and hair-metal pipes, and he puts them to good use on his band's kinetic, catchy songs. I already had him pegged as a less-mousy Ben Gibbard, and the balls-out cover of the Postal Service's "The District Sleeps Alone Tonight" sealed the deal. Elsinore just wrapped up the recording of its next disc Yes Yes Yes, and if the dance-heavy title track is any indication, it should be stellar.