Show Review + Setlist: Bear in Heaven and Twin Sister at the Luminary Center for the Arts, Saturday, July 31 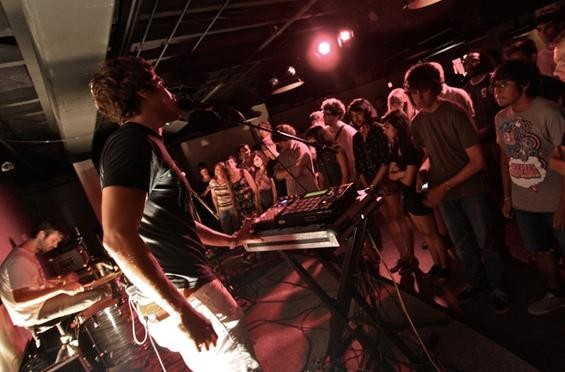 Lee Harris
Bear in Heaven at the Luminary Center for the Arts. More photos here.

In other words, some reviews write themselves. But sometimes, I have no idea what to say save for: Invent a time machine, go back to yesterday and make the decision to go see Bear in Heaven and Twin Sister at the Luminary Center for the Arts. I hope the 140 or so in attendance last night can back me up on this.

View an entire slideshow of the Bear in Heaven/Twin Sister show here.

Long Islanders Twin Sister delighted with their modern, dreamwave take on '70s disco and '80s new wave. Live, Andrea Estella's smoky vocals sound a bit like Beach House's Victoria LeGrand doing simultaneous impressions of Cocteau Twins' Elizabeth Fraser and Bjork. The way she sings seems to be an affectation, but it's compelling. Thankfully, Twin Sister didn't fall into the Beach House trap of playing everything exactly like it does on record -- the band was slightly noisy with burned-out melodies and no end to the swirling synth and fuzzy guitar. And while the band used the same sonic textures throughout the set, it managed to wrench a different sound out of every song. "I Want A House" in particular was all waterlogged melody; Estella's earnest delivery enchanted while keyboardist Udbhav Gupta punctuated the cut with an electronic beep, almost like that annoying ding when you've left your lights on in your car.

Another track that's been blogged into it's next life, "All Around and Away We Go," was reminiscent of another Andrea: Andrea True Connection's disco classic, "More More More." The freewheeling synth twinkle and and glowing vocals got a little too close to Beach House's "Norway" for my taste, though it had enough of a psych wobble to differentiate the two. Twin Sister closed with a tender "The Other Side of Your Face."

Brooklyn transplants Bear in Heaven brought the house down with its perfect execution The band was loud and awesome and Jon Philpot's voice was even more deliciously quirky live. (Bizarrely enough, his speaking voice is quite deep, a stark contrast from his higher-pitched singing voice.) Bear in Heaven's cinematic sound looms and dissolves with relentless motorik rhythms, This Heat prog experimentation and cavernous psychedelic wonderment. The band packs so many genres into every song, I'm beginning to wonder if this new decade marks the end of genre distinctions as we know them.

There's a reason why Bear In Heaven opened with "Beast in Peace": It also kicks off its sophomore effort, Beast Rest Forth Mouth, and the drums keep a tribal beat while cymbals simmer and Philpot eases us into the first of many towering choruses. They played every song off Mouth, whose title is a play on the four cardinal directions; "Bag of Bags" was the only track from 2007's Red Bloom of the Boom.