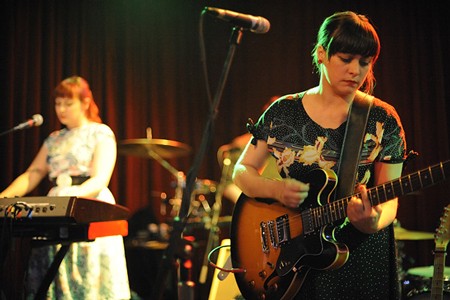 Photo: Todd Owyoung
Camera Obscura last night at Off Broadway. See more photos from last night here.
Understanding the ins and outs of concert promotion is a little like understanding quantum physics: There's sold out, and then there's beyond sold out. Rumor has it that last night's Camera Obscura show at Off Broadway was in the latter camp, but while the accommodations were certainly snug, the Scottish sextet kept the mood appropriately mellow and refined.

Led by singer and guitarist Tracyanne Campbell, Camera Obscura is not, first and foremost, a rock band. The group makes very pretty, intricately arranged albums that pair Campbell's bittersweet vocals and often self-reflective lyrics with celestial guitar chimes, Northern Soul organ licks, string and brass sections and a whole lot of reverb. For its first St. Louis show, it was anyone's guess how this pop band, beloved for its studio perfection, would translate live.

See a slideshow of Camera Obscura at Off Broadway

As it turns out, they do a pretty good job of transmitting the song's components on stage. The six band members took the stage at 10:15 p.m. and began its set with the ascending piano chords of "My Maudlin Career," the title track of CO's latest LP. The band battled sound issues for the first few songs. I couldn't make out a single word Campbell sang early in the show, and that's not the fault of her charming Glaswegian accent (which is crystal clear on record). The glockenspiel-led "Swans" was similarly swampy as the soundman worked out the kinks, but even through the muck you could hear the interplay between keyboardist Carey Lander and guitarist Kenny McKeeve, whose creamy guitar leads are an essential part of the band's appeal.

The crowd responded more positively to "Tears for Affairs," a track from the 2006 breakthrough Let's Get Out of This Country. That was the album that took Camera Obscura's key traits -- smart bedroom pop, tender confessional ballads, a penchant for '60s bubblegum melodies -- and shot them in glorious widescreen. This year's My Maudlin Career continued in much the same vein, taking dreamy, harmony-soaked pop songs and decking them in lush, reverberating orchestration. It wasn't a huge step forward for Camera Obscura, but the album solidified CO's place in the indie firmament as the go-to group for this kind of music.

Throughout the fifteen-song set, the band aired most of My Maudlin Career, and in concert the songs took on a more dynamic range than they did on disc. The Spector-meets-Motown stomp of "Honey in the Sun" came early in the set and is one of the most relentlessly feel-good songs for a band known to be beautifully mopey at times. The balladry of "James," though tender and touching, felt lost even in a club as small as Off Broadway (certainly one of the most intimate venues the band has played on this tour).

​The group dipped into its back catalogue for a few numbers. They dusted off the acoustic-guitar-led "Eighties Fan," Camera Obscura's first big single overseas and the tune that won them the praise of the influential BBC disc jockey John Peel (RIP). "Teenager," from Underachievers Please Try Harder, was a throwback to the days when CO had to endure countless comparisons to Belle & Sebastian. As the '00s come to a close, it's safe to say that Camera Obscura had a better decade than Stuart Murdoch's lovable band of Glasgow popsmiths.

The show ended with a string of what might be the group's four or five strongest songs. "French Navy," the lead single from Maudlin, began with a charming false start before Campbell plowed through the '60s girl-group flourishes. Much to the crowd's delight, Camera Obscura ended with four tracks from Country: the introductory organ chords for "Lloyd, I'm Ready to Be Heartbroken" were met with immediate applause, and the dynamite "If Looks Could Kill" ended the set with bouncy aplomb. The brief encore concluded the show with "Let's Get Out of this Country" and a particularly lovely "Razzle Dazzle Rose."

San Francisco's Papercuts opened the show with a set of hazy, dreamy songs pitched somewhere between surf rock and shoegaze. The band owes an obvious debt to the Clientele and Doves, and singer Jason Quever has an especially androgynous way on the microphone. It was a fine set in its own right, but Papercuts couldn't quite win over the attention of the chatty, slightly anxious crowd.1. My Maudlin Career
2. Swans
3. Tears for Affairs
4. Honey in the Sun
5. Teenager
6. The Sweetest Thing
7. Come Back Margaret
8. Eighties Fan
9. Forest and Sands
10. James
11. French Navy
12. Lloyd, I'm Ready to be Heartbroken
13. If Looks Could Kill
Encore
14. Let's Get out of This Country
15. Razzle Dazzle Rose