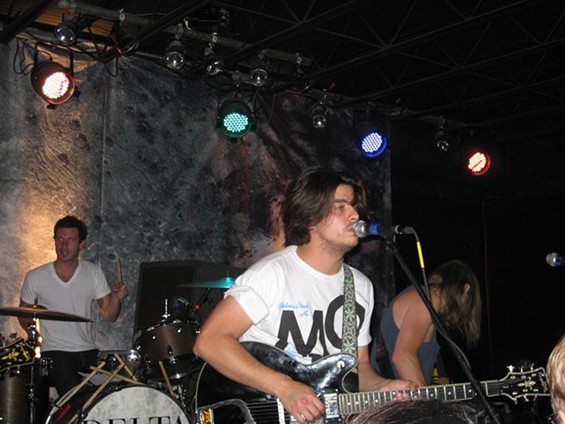 From the moment Delta Spirit lead singer Matthew Vasquez stepped on stage, sporting a Cheshire-cat grin from ear to ear, he was well on his way to charming an excited, surprisingly large Monday night crowd. He thanked everyone for coming, and then the five-piece immediately blazed into "Bushwick Blues," the single from its latest full-length, History From Below.

Delta Spirit is by now well-known for soulful Americana rock that's very much reminiscent of one-time tourmates Dr. Dog, although the band breaks new ground with its vast, lush soundscapes. In particular, "White Table" rings with tumultuous energy that's built from a more technically refined palette. What the band continues to do best, though, is burn through tight guitar parts, incite audience sing-a-longs and smatter it all with keyboard - or even a trashcan lid. "People, Turn Around" and "St. Francis" smartly combined all of these elements with the substance and fervor of a '60s protest song.

Most of the Delta Spirit's performance rests upon the simple fact that Vasquez is an honest-to-goodness entertainer. He tells just the right endearing antidotes before each song and then polishes it off with many thanks to the audience, before launching into a song with so much bodily force that you think he might not make it out alive. He even coaxed about 90% of the audience to the floor during a closing rendition of "Shout" just to make them break out into carefree dance at the end.

Ezra Furman & The Harpoons immediately brings to mind a youthful, rollicking Ryan Adams combined with the sharpness of Adam Green. The songwriting is colored with a quirky sense of humor commonly bestowed upon the young and artistic, making it enjoyable and suitable for the next big young-adult-indie film (hello, Juno). Songs such as "Take Off Your Sunglasses" certainly point out that these neighbors to the north are capable of turning out wandering, punk-inspired gems.

Openers the Romany Rye also hail from California and have a vested interest in reviving the sound of organ-filled, '70s-era, easy-rolling folk rock. There were most definitely some very long periods of "jamming" but for the most part it was the kind of good-natured tangents often heard during My Morning Jacket's anthems.