Show Review + Setlist: Michael McDonald Brings It All Back Home at the Touhill, Friday, July 23 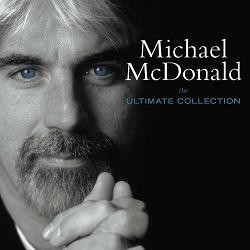 Hometown legend Michael McDonald returned to St. Louis for a sold-out concert at the Touhill Performing Arts Center on the campus of the University of Missouri-St. Louis. The show was a well-paced mix of hits from McDonald's tenure with the Doobie Brothers as well as solo songs and soul covers, all designed to showcase the singer's still-powerful, often imitated/never duplicated voice. 35 years after first reaching national acclaim with the Doobie Brothers, McDonald hasn't lost his knack for wresting the emotional core from these songs; if anything, he's learned how to use his vocal instrument in a more forceful manner.

Seated behind an electric keyboard, McDonald looked trimmer than in recent years, and his trademark white hair and beard appeared luminescent even from the upper balcony. The show began with "Peace," a down-tempo piano ballad initially recorded as a Christmas song, but its themes of redemption were a nice fit for the night's show, which benefited the local chapter of the National Council of Alcoholism and Drug Abuse. From there, McDonald and his ace six-piece band offered an overview of well-loved songs. Two of his biggest solo hits, "Sweet Freedom" and "I Keep Forgettin'" came back-to-back, the latter sacrificing some of the original recording's minor-key melodrama in favor of a more straight-ahead rhythm.

McDonald has spent much of the past decade re-recording American soul classics, principally from the Motown catalogue. While the concert featured three Marvin Gaye songs, some of the highlights came through lesser-known covers. Ray Charles' "You Don't Know Me" worked beautifully as a slow, spare kiss-off, and local diva Denise Thimes was a featured guest on Thom Bell's "Stop, Look, Listen (To Your Heart)," originally a hit for the Stylistics. McDonald returned to the Philly soul sound a few songs later for a faithful pass at Teddy Pendergrass' "Love T.K.O."

But unsurprisingly, the biggest applause was saved for McDonald's Doobie-era hits. "Minute By Minute" began as a solo piano workout, giving the singer a chance to show off his R&B-styled keyboard chops before kicking into the song's unmistakable intro. After a one-two punch of "Ain't No Mountain High Enough" and "Ain't Nothing Like the Real Thing," the set ended with perhaps McDonald's best-loved song, "What a Fool Believes."

After a brief respite, McDonald returned for piano-and-organ version of Leonard Cohen's beloved "Hallelujah." While literally hundreds of singers have performed this song, McDonald took some inventive liberties with the arrangement, subverting the stair-stepping chord progression of for a more open, impressionistic performance. Interestingly, he only sang three of the song's many verses and savored the song's one-word chorus. It was a bit ponderous in places, but McDonald gets credit for taking chances where most singers would play it straight.

The night ended on a more upbeat note, with an obligatory but still moving "Takin' it to the Streets," which featured forceful contributions from the tenor saxophonist and female back-up singer. And since this was a hometown show, the set ended with a little walk down memory lane: opening act Steve Scorfina, with whom McDonald played music as a teenager, returned to the stage for a bluesy run at Ray Charles' "I've Got News for You."

Closing the night with another Ray Charles song made sense. In our conversation a few weeks ago, McDonald reminisced about listening to Charles as a boy. "For me, he was my idol. I thought if someday I could make that kind of magic or come close to making a record that sounded like that, that would be a dream come true." The humble singer would never admit it, but for the many fans at the Touhill last night, McDonald has been making his own kind of smooth, soulful magic for decades, and last night's concert was a testament to those gifts.