Show Review + Setlist + Photos: Iron & Wine Takes a Sonic Sojourn, Gets Lost Along the Way at the Pageant, Saturday, November 13 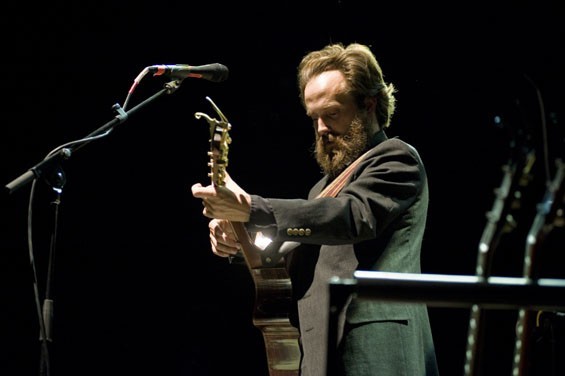 As soon as he strode onto the low-lit Pageant stage, it was clear that Sam Beam was a changed man. Not only had the Iron & Wine leader trimmed his famed beard and flowing locks to a respectable length, the singer and guitarist was downright chatty even before he played the first note. Gone is the shy, shambling Beam whose low-slung, intricately crafted folk songs pierced the soul like a devastating secret. Instead, last night's show confirmed his status as charming, engaging bandleader, an oft-heartbreaking singer and a tireless tinkerer of his own work. But after nearly two hours of largely reworked material with the aid of a new backing band, this new direction seemed like either a half-baked idea or an outright misstep.

For longtime fans, the show began in a comforting, familiar fashion. Beam played a five-song set of solo acoustic songs from all corners of his catalog, starting with the Twilight soundtrack inclusion "Flightless Bird, American Mouth." He performed the majority of the song a cappella, pushing his strong falsetto and full-bodied croon toward the rafters. With a largely respectful audience already in rapt attention, Beam could have easily stepped away from the microphone and let his voice carry. He followed with another soundtrack-based rarity, "The Trapeze Swinger"; here, he altered the tempo to allow the song's circular pattern to facilitate a push-and-pull that worked perfectly in the solo setting.

As the bulk of the concert would prove, Beam has no qualms about changing the arrangements and overall moods of his songs; even during the solo section, one had to listen closely to pick out the tune of even his best-loved songs. "Evening on the Ground (Lilith's Song)" slowed to a menacing gait, which allowed Beam's rich, knotty lyrics to take on a darker tone. The song highlights one of his songwriting specialties: taking Bible passages and turning them into short works of Southern Gothic fiction. The next song, "Naked as We Came," displayed one of his other trademarks: writing beautifully fatalistic love songs. No one else makes the prospect of growing old and dying in the arms of a lover sound so enticing.

The solo set wrapped with the Oedipal ballad "Upward Over the Mountain," a standout from his 2002 debut The Creek Drank the Cradle. It was an appropriate transition from the Iron & Wine of old to its current incarnation, as Beam introduced his six-piece backing band. Some familiar faces helped Beam flesh out his songs, as Calexico cohort Nick Luca sat behind a bank of keyboards and fellow Sub Pop alum Rosie Thomas sang harmony vocals. The full-band set began shakily, as the b-side "Morning" never quite congealed - the punchy electric piano and slinky Telecaster tones didn't blend well, and the presence of a full-time percussionist steered the whole affair uncomfortably close to an anaesthetized Grateful Dead jam.

"My Lady's House" only upped the weirdness by turning the acoustic ballad into an honest-to-God slow jam. Beam's songwriting has always exuded a certain sensuality, but the new arrangement suggested "Sexual Healing" for the heavily flannelled. When the band found the groove, the results veered from interlocking polyrhythmic jams to reggae-folk riddims to something approaching worldbeat. Sometimes, it fit the mood of the songs: "Sodom, South Georgia" made good use of the synthetic bass tones emitting from the bassist's tiny keyboard, and "Pagan Angel & a Borrowed Car" recalled some of Wilco's best experimental bits.