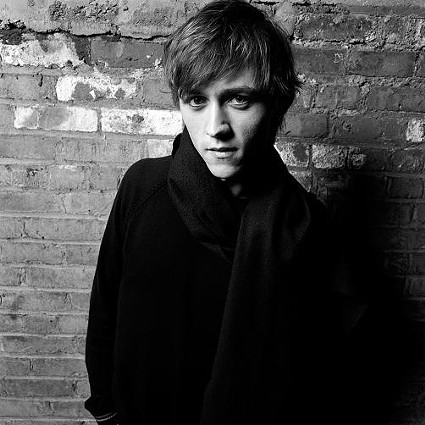 Before "Pioneer," Sondre Lerche (for the record: SAHN-druh LAIR-kay) remarked upon the church-like layout of the Old Rock House. "Let's work with that," he said. Let us, indeed: a reverential audience; a compulsively charismatic man on stage; and songs full of imagined scenarios and embroidered conceits. In fact, the only difference between Sunday mass and Lerche's show last night is that Lerche's show was enjoyable.

After a five-year absence, the Norwegian singer-songwriter returned to St. Louis all by himself, guitar in hand and glimmer in his eye. By golly, it's been a while, and far too long: Drawing from his six albums, Lerche's hour-plus set confirmed his reputation as a genuine pop stylist. "Good Luck," from his most recent, Heartbeat Radio, started a show that exalted crisp delivery and a kind of barely restrained glee all too rare in miserabilist indiedom.

Switching between electric and acoustic guitar, Lerche performed his songs with the physical verve of a troubadour busking for that day's meal. "I Guess It's Gonna Rain Today" and "Heartbeat Radio" each profited from the solo treatment. Where his full-band sound can overfloweth with instrumentation, the unadorned incarnations bring Lerche's classic-pop melodies, not to mention his sense of showmanship, to the forefront.

Lerche has elsewhere supposed that his fan base is made of "music nerds like myself, a lot of girls and a lot of Burt Bacharach fans." The second group was no doubt a sizeable presence in last night's elbow-room crowd; the first and third groups were harder to identify (except for those wearing ascots), but neither could have gone home dissatisfied. With his gymnastic tenor, Lerche writes sophisticated songs in chord progressions that borrow as much from jazz as bossanova. "Two Way Monologue," "No One's Gonna Come," "Sleep on Needles" -- all were rendered with almost fatiguing virtuosity and ornamented by inventive guitar flourishes. Even "My Hands Are Shaking," from Dan in Real Life (a movie redeemed only by Lerche's soundtrack, and Juliette Binoche), left scorch marks on the stage.

Throughout the show, Lerche was good-humored and gracious, sometimes serving up thick-sliced ham in his between-song banter. He jokingly apologized to Nelly for stealing the lyric "Is it hot in here?" from "Easy to Persuade," and then solicited the proper local pronunciation of "here." He self-consciously lounged around at the right of the stage before beginning his encore, having no backstage to which to retreat. And for his last song, while "a lot of girls" started to sing the Lillian Samdal part in "Modern Nature," Lerche smiled broadly and let everybody take a verse. He was done proselytizing for the night.

It's almost unfair, then, to juxtapose Lerche's seasoned expressiveness to opener JBM (a.k.a. Jesse B. Marchant), whose debut, Not Even in July, was self-released last year. That album is a simmering caludron of solemn fingerpicking and tender strumming, couched inside JBM's sweetly forlorn voice. It's all starchy singer-songwriter fare, as was his performance last night: a little too withdrawn and self-serious, although if the merch table is ever any indication (just like at a real church), he, too, made himself some converts.