Show Review: Todd Rundgren and the Fixx at the Roberts Orpheum, Friday, September 10 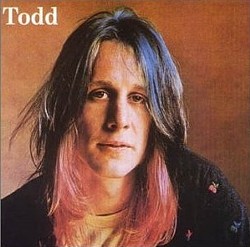 Say this about Todd Rundgren: When revisiting his earlier work, he doesn't take shortcuts. Earlier this year, he toured a song-by-song recreation of A Wizard, A True Star, his sprawling 1973 album. This fall, he's taken on no less than three LPs worth of work: 1974's Todd and 1981's Healing. That's a lot of Todd in one sitting, even if (like me) you consider yourself a fan. After all, these two of his least commercial works. Neither has an "I Saw The Light" or a "Bang The Drum All Day" to function as an easy entry point. It speaks well of his enduring audience that they're willing and able to follow him down these unusual paths. (Thank rundgrenradio.com, which polled its listeners as to which other albums they'd like to hear live.) But it remained to be seen how he would tackle such a long setlist at the Roberts Orpheum.

The Fixx opened with a very long, sleepy set. In the decades since his brief chart run, lead singer Cy Curnin has refashioned his image as a would-be crooner in the mold of Leonard Cohen or Bryan Ferry, drinking red wine and mumbling incomprehensible nothings between songs. This might work if he had Cohen's literary lyrics or Ferry's stage presence, but when applied to "One Thing Leads to Another" or "Red Skies" -- and when backed by a lackluster band, as he was last night -- it falls flat.

Eventually the lights went down, the familiar backwards vocal of "How About A Little Fanfare?" rang through the PA system, the curtain went up to reveal Rundgren in his version of a sci-fi monk's coat, and the Todd portion of the evening began. Rundgren recorded the album at the end of the psychedelic bender that produced AWATS. It is Rundgren's White Album, covering everything from loopy parody ("An Elpee's Worth of Toons") and '70s style hard rock ("Heavy Metal Kids," "Everybody's Going to Heaven"), to some of his most delicious pop melodies ("A Dream Goes On Forever," "Izzat Love?"). However, it's not an album to listen to in one sitting. If, like me, you're no fan of extended guitar solos, there are huge stretches that are rough going at best.

It also makes a song-by-song recreation a logistical nightmare for the musicians involved. Rundgren and his band (including ex-Cars keyboardist Greg Hawkes, ex-Tubes drummer Prairie Prince, and faithful lieutenant Kasim Sulton) solved the problem by making everything portable and wireless. The piano, keyboards and even the drum set were fitted with wheels, to be carted on and offstage as required. Everyone had wireless mics as well. Coupled with constantly changing LED backdrop, this made for a dazzling presentation.

Rundgren and band played all but two Todd songs, "In and Out The Chakras We Go (Formerly Shaft Goes to Outer Space)" and the anthemic "Sons of 1984." The crowd gave virtually every song a standing ovation. However, at times Rundgren lacked emotional commitment in his own material. He's on record as disparaging big hits such as "Hello It's Me" and "I Saw The Light," as being too simple and formulaic. Still, it was disappointing to see him listlessly pace the stage and engage in droll play-acting during the gorgeous "A Dream Goes On Forever." On the other hand, his cover of "Lord Chancellor's Nightmare Song" was both comedic and challenging, "King Kong Reggae" simply rocked, and even the guitar pyrotechnics were fine in small doses.

After a short break, it was time for Healing. A low-key suite that was overlooked while his other band, Utopia, released two or three albums a year, Healing hardly seemed like a candidate for rediscovery. Imagine my surprise when this portion of the concert turned into the evening's highlight.

For one thing, it took a lot less staging. Other than a ten-piece choir from Webster University (who looked adorably thrilled to be there), the setup was relatively simple - keyboards, guitars and vocals. Freed from the shuffling around and jagged mood changes, Rundgren seemed to be having more fun, happily dancing around and imbuing each song with an quasi-gospel fervor. This was appropriate, since much of Healing references religious devotion and imagery without subscribing to one particular faith. It took a few songs for everything to click, but by the three-part "Healing" closing suite and "Time Heals," the standing ovations were back.

Then it was time to wait for the encore. There was no doubt what it would be: "Sons of 1984," Todd's closing track. Not only had it been omitted earlier in the night, it's tailor made for live performance. "Sons of 1984" was actually recorded live at Wollman Rink in Manhattan, with the audience and Rundgren trading off on vocals. It's a moving way to end an album. Considering that the tour's official website is even titled sonsof1984.com, it was a safe bet for an encore. The band reappeared, the choir filed back onstage, and everyone sang along happily. Finally the curtain came down, but the song wasn't over -- the band kept playing, and when they finally stopped, the audience continued singing the chorus for another few minutes a capella. It was a nice memory as we all emptied out of the theater into the rainy evening.