Shred Like a Pro: Air Guitar Tips from the Champs 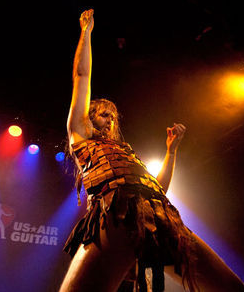 Musicians do quite a bit of prep work before performing a face-melting show. After all, there's makeup, costumes, choreography and (sometimes) fake blood to consider.

To the surprise of many, air guitarists make the same intensive provisions.

With St. Louis hosting its first official U.S. Air Guitar qualifying event this week at the Firebird, local competitors might need a little pre-game advice before taking the stage.

Luckily, Howard, Eric "Mean Melin" Melin and Jason "Lt. Facemelter" Farnan are around to be Yodas to our air guitar padawans. Below, the three USAG champs share a few secrets to nailing the performances that adults secretly have been honing behind closed doors :