The 2012 Riverfront Times Music Showcase is a month away. And if that is our own St. Louis Music holiday, then consider this the season: Over the next month, we'll be making our cases for all 125 bands and artists nominated for an RFT Music Award this year. Each weekday between now and the showcase on June 2, we'll introduce the nominees from one or more of our 25 categories. For each artist you will find a photo, a streaming track to sample and a few words from the staff at RFT Music.

Beth Bombara At this point, the "singer-songwriter" label has become just about as cliché as this St. Louisan is not. Wise beyond her years with range beyond her genre, the young, confident crooner has proven a formidable solo force through two EPs and a full-length, as well as stints pairing her light, lovely vocals with Old Lights and Cassie Morgan. Bombara's earnest and occasionally eerie blend of folk, country and the softer side of rock provides a spot-on soundtrack to the city's summers and grocery stores, where her good nature and good tunes make for a solid, if unconventional show. Outside of her clear vocals, Bombara's subtle strengths lie in her backing instrumentation, which follows the same organic, unrushed pattern of arrangement as her intro and outrospective lyrics. --Kelsey Whipple

Caleb Travers Good songwriters possess the ability to wear their hearts on their sleeve without being labeled as sensitive; Caleb Travers has that gift. His music is indie folk with various undertones of country, rock and a dash of pop to fill the cracks. He released a seven-song EP titled Ain't No Jukebox last fall, a couple years after appearing on the scene. Often performing solo with an acoustic guitar, Travers has a rich tenor that dips and soars as he sings the heartbreaking lyrics of his relaxed songs. Beauty is contained in the space that surrounds his music. His arrangements breathe -- a tactic that grabs the listener and doesn't let go. --Scott Allen 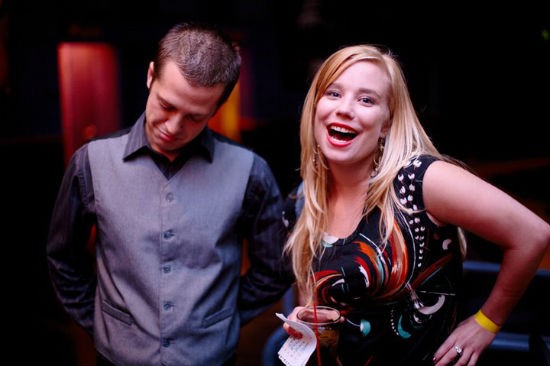 Courtesy of Ellen the Felon

Ellen the Felon & the Mattronome Ellen the Felon fills a noticeable void in the St. Louis music scene with her dramatic piano pop. Sometimes campy, sometimes brooding but always brimming with feeling, Ellen's music twists and turns with knotty progressions and skilled jazzy runs that are often matched by her frequent partner in crime, busy drummer the Mattronome. She can also lay off and deliver straightforward, sincere ballads. Comparisons to Amanda Palmer and Fiona Apple are not unmerited, but Ellen possesses an airier voice and more playful demeanor than those stern artists, and that makes her more fun. (Can you imagine either of them writing a boogie rock song from the perspective of a cat?) The mood might be sad when she sings about only being thought of as one, but as a performer, Ellen the Felon really is a good-time go-to party girl. --Bob McMahon