Six Ways To Avoid Getting Robbed On Tour

Although musicians are infamous for walking out on bar tabs, trashing hotel rooms and hijacking chuckwagon sandwiches from gas stations, there is one thing they deserve: the ability to torture society with their particular brand of art. Sadly, it happens all too often that bands' tours are derailed or altogether cancelled as a result of the actions of opportunistic criminals. St. Louis has seen a rash of incidents lately wherein bands' vans have been broken into and looted of their valuables. Most recently, reunited Texas emo band Mineral was taken for thousands of dollars worth of stuff after playing a show at the Firebird in St. Louis.

While it's likely that artists will continue to be the targets of such a devastating crime, we've come up with a few helpful suggestions to prevent bands from being robbed on tour.

6. Let A Derelict Grindcore Dude Live In Your Van

Everyone knows this guy -- and if you don't, you're actively avoiding him. Fortunately, by providing a grimy grindfreak a place to crash and a way to travel around, you've created the most loyal and foolproof way to guard your belongings. Any intruder of your vehicle will find themselves encountering a flurry of drunken punches and shivs made from fast food utensils. The only real drawback of keeping this guy around is the musky smell and constant demand to listen to bands with names like Bathtub Shitter and Paracoccidioidomicosisproctitissarcomucosis. But hey, you're on tour, so chances are you already smell and are listening to awful music anyway. 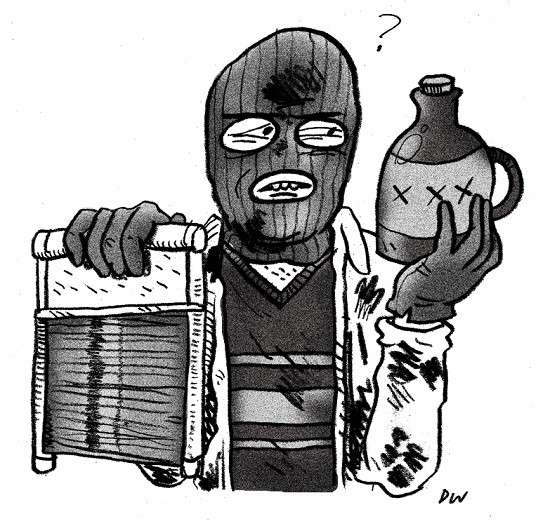 5. Be A Stupid Hippie Band

Honestly, I try my absolute hardest not to listen to awful music, otherwise I'd have a better description than "stupid hippie band" -- but you know the kind of band I'm referencing. It's those bands where people wear overalls and play music that basically sounds like Hootie and the Blowfish with a homemade banjo but without any irony. Anyway, you'll be completely safe on the road, as no one will want to steal your worthless jugs, stupid tub bass and cherished drum-kit made from a barrel, some pie tins and two five gallon buckets. However, someone might decide to torch your van just to get you guys to stop touring.