The term pop-punk had an entirely different meaning fifteen or so years ago. Back then, bands like Jawbreaker, The Descendents, Green Day and Screeching Weasel embodied the angsty sneer associated with punk music, but they all leaned on more poignant and desperate aspects of love. More recently, the term has taken on a more insincere, prepackaged slant. It's almost as if haircuts and skin-tight clothes help identify the tired, recycled sound.

The Smoking Popes helped define that sound back when it was actually about sound, and it continues to hone in on all the genre's original lovable nuances within its trademark power-pop, lounge punk blend. Last night at the Firebird, Josh Carterer's serene croon sounded as delicate as ever; fractured and helpless in the most endearing way. Crowd favorites like "Rubella" and "No More Smiles" exemplified these elements, as did newer gems "Wish We Were" and "Punk Band." His acoustic take on "Megan" from the band's defining album, Destination Failure, was heartfelt and novel, but it lost some muster without the help of the other two Carterer brothers, Eli and Matt, and the spot-on drumming of Neil Hennessy.

Black For a Second opened the show with no bullshit intensity and urgency. It's always nice to hear the band plugged into a pro sound system like the Firebird's. The singe of singer Joey Jordon's white-hot vocals was more distinct than at a lot of the house parties and crappy PA's he often finds himself screaming through.

The Livers filled out the middle slot and summoned some life out of the thin, albeit attentive, crowd. The duo (quartet, if you count the recorded video version of the rhythm section displayed on the projection screen) mostly delivered its trademark sugar-coated, slop-punk greatness. Some botched timing with the rhythm tracks, however, saddled its set a bit. Regardless, it's hard not to enjoy the fun and games that come with the Livers. 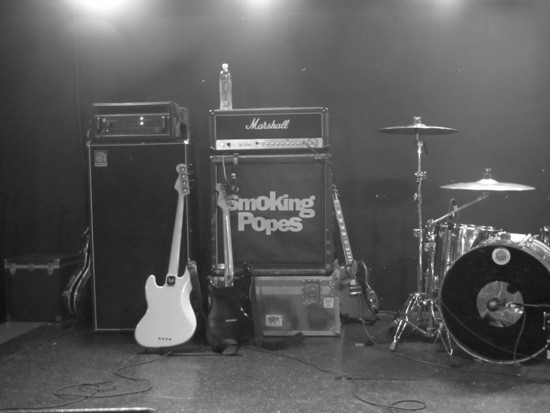